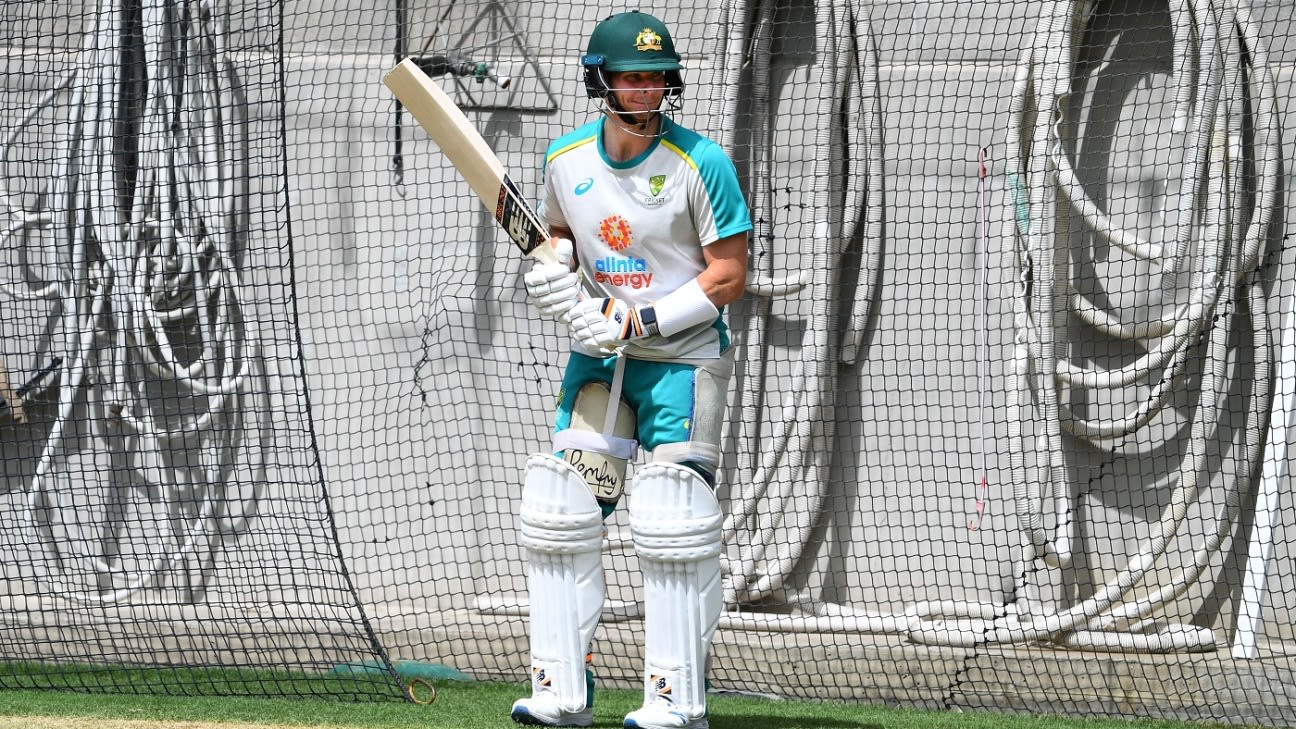 Batsman hasn’t had four single-digit scores in a row since 2015, but Australia’s coach is not stressed

From Australia’s point of view, now would be a good time for Steven Smith to find his hands for the second time this season.

The last time he did, during a quarantine training session in Sydney during his 14-day isolation following the IPL, he followed it with back-to-back hundreds off 62 balls in the first two ODIs.

It has been a different story in the first two Test matches with completed innings of 1, 0 and 8 in Adelaide and Melbourne. He was unbeaten in a brief stay in the run chase in the first Test, but if he’s dismissed for single figures in the first innings at the SCG, it will be just the second time he has made three in a row – the other being a run of four during the 2015 Ashes.

Since his comeback to Test cricket in the 2019 Ashes, he had only failed to reach double figures in two of his 14 innings: the first innings in Brisbane against Pakistan when he came in at 351 for 2 and the second innings against New Zealand at the MCG when Australia were setting up a declaration.

Any discussion about Smith’s form needs a big dose of perspective as well: he is still averaging 61.33, second behind Don Bradman if the cut-off is more than 20 Tests. However, though it’s skewed by him missing the whole 2018-19 season, his last Test century in Australia was December 2017 against England at the MCG.

It was hard work last summer against New Zealand, and especially Neil Wagner, although he still found a way to grind out important runs in the three Tests. This season, the India attack in the first two Tests have had a hold over him few have managed.

R Ashwin has been key to this, having him caught at slip in the first innings in Adelaide and then taken at leg slip at the MCG. That was followed by having his leg stump clipped by Jasprit Bumrah when he moved too far across to the off side. It’s a tactic many have used before, only to see the ball worked away for runs into the leg side; India have so far suffocated that route as well although Smith is not alone in that.

“Imagine how good we’ll be when he does starting batting well,” Australia head coach Justin Langer said with typical exuberance. “That’s how I look at it. He hasn’t had the best of series so far, he’ll be the first to admit that. But my gosh, what I know about great players is the longer they miss out, the sooner it is that they’re coming good again. So that puts a big smile on my face.”

During Australia’s training session at the SCG on Tuesday, Langer briefly positioned himself behind Smith’s net. But he wasn’t there for long, soon at the bowler’s end of the net containing David Warner and Will Pucovski. Perhaps he had already seen enough and was content to move onto more pressing issues.

“I don’t coach Steve Smith. Steve Smith coaches himself and I’m sure he’s going to work it out,” Langer said before training when asked if Smith’s form dip provided a coaching challenge. “He is a great player and I can’t wait to watch him bat this Test match and the next Test match.”

This Test series was Smith’s first first-class cricket since the Test series against New Zealand which ended in the first week of January 2020. He was at the IPL when the early-season Sheffield Shield matches were taking place and did not feature in either of the Australia A matches before the Test series so his training, which also involved having to prepare for a pink-ball Test, has all been nets or at most simulated middle practice.

“Stevey’s always hitting a lot of balls, he did a lot leading up to it, but there’s nothing, even for the greatest of players, that replaces time in the middle and we know what a great problem solver he is,” Langer said.

There is every chance that Smith will come good over the next two Tests, but his low returns in the first half of the series created a perfect storm scenario for Australia. Their best batsman was low on runs, their other leading batsman, David Warner, was injured, another opener was out of form, and they had a debutant at No. 6.

It didn’t cost them in Adelaide as Pat Cummins and Josh Hazlewood cut India down for 36, but they couldn’t get away with it twice as they made totals of 195 and 200 in Melbourne. India have not been full of runs, but their victory was anchored around a defining century by Ajinkya Rahane. Australia’s current high score is Tim Paine’s 73 and, to highlight a longer-term trend, their highest score in the last two series against India is Marcus Harris’ 79 made at the SCG two years ago.

“There’s plenty of batting talent in Australia,” Langer said. “Obviously we are addressing the issues, any time in Test cricket you are not scoring over 200 you are looking for ways to improve. You have got to look at our strategies against the Indian spinners, Ashwin’s bowled very well, we’ve worked hard on that the last week or so. Bumrah is a world class bowler and [Mohammed] Siraj coming in, I think he’s very, very skillful and I thought he bowled very well for his debut.”

It’s been a bowlers’ series so far and it may remain that way, but if Australia want to come out on top a batsman or two will need to stand up. Whether Smith can break free of India’s hold may be a deciding factor.