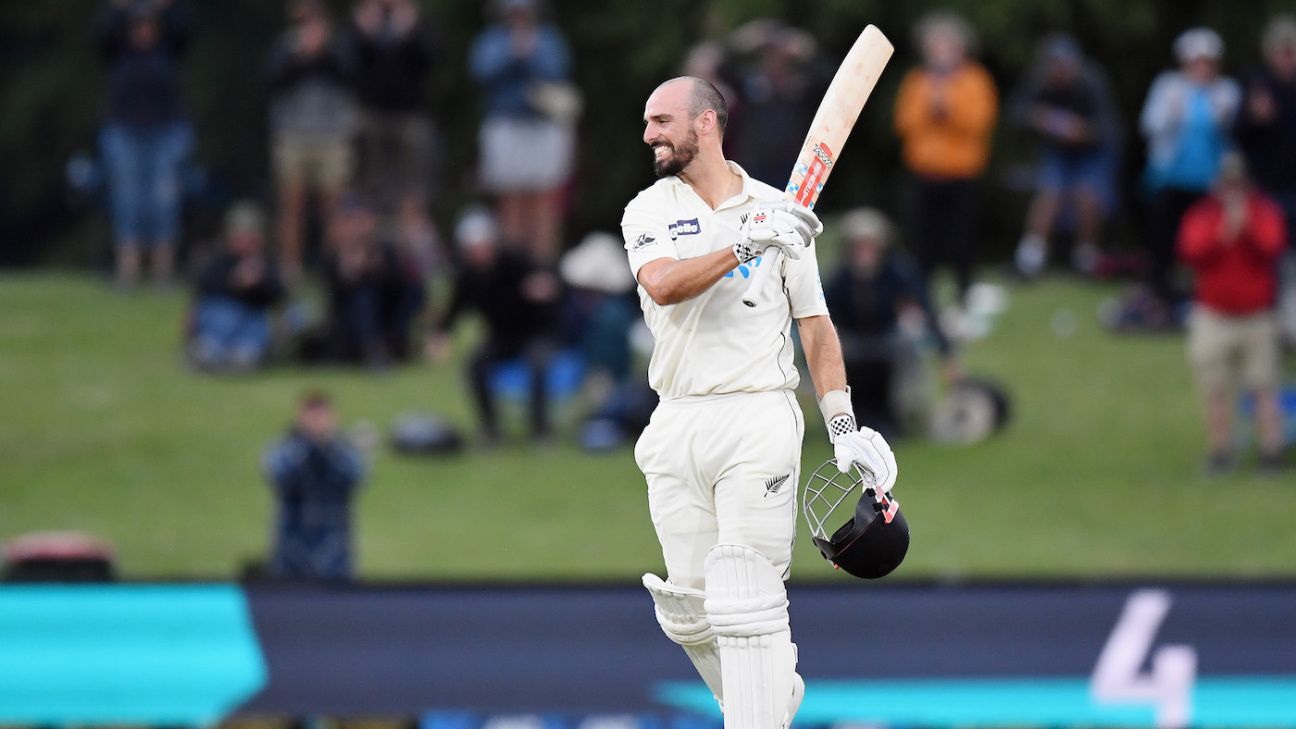 “Kane is a freak, isn’t he? He’s amazing and will go down easily as New Zealand’s greatest.”

Daryl Mitchell has described getting his maiden Test century as “surreal”, after he stroked 102 at his adopted hometown in Christchurch. New Zealand were 599 for 6 at tea and had a lead of 302, but the captain Kane Williamson allowed the team to keep batting, something Mitchell was grateful for.

Mitchell, who was unbeaten on 69 at the time, made the most of the extra time, as he and Kyle Jamieson smacked 60 in 4.5 overs to increase New Zealand’s total to 659.

“It probably hasn’t sunk in yet, to be fair, it’s pretty surreal at the moment,” Mitchell said. “I was given two overs to start after tea, so I thought after two overs we were off but obviously very grateful for Kane and the coaching staff to allow me to get that milestone. I was swinging pretty hard there at points to try and get there and very grateful for that to happen. I was just happy to go out there and try and be busy and contribute to trying to put a total on for us to try and get 10 wickets.”

With two days still left in the Test, New Zealand hold all the cards, having already dismissed Pakistan’s opener Shan Masood for a duck in the second innings, ensuring they lead by 354 runs. Mitchell credited Williamson’s sublime double-century for putting the hosts in such a commanding position.

“Obviously Kane’s 238 .. that’s pretty amazing and he has set us up for a chance to win this Test match,” Mitchell said. “He is a freak, isn’t he? He’s amazing. He makes the game look so easy at the moment and the way he’s going about things, it’s cool to see him doing so well. For me I’ve played against Kane when I was about 14 years old and now to be playing test cricket with him as well. He’s a very special player and probably will easily go down as New Zealand’s greatest.”

Pakistan were dismissed for 297 on the opening day, and they did not help themselves with their poor fielding either, as New Zealand capitalised on several dropped catches. Williamson and Henry Nicholls went on to stitch a partnership of 369 runs for the fourth wicket, the best ever at the Hagley Oval. Among the bowlers, Naseem Shah (0-141) and debutant Zafar Gohar (0-159), had particularly forgettable outings, bowling a combined 58 overs without a single wicket.

“As a fast bowler there isn’t any excuse,” Shah said on a day when he also bowled nine no-balls. “The wicket was good as it had bounce and I was getting the seam out of it but then there were mistakes which I shouldn’t have done. I was pushing hard to bowl fast hence over stepping. As a fast bowler with no balls, it really shatters your confidence and I am trying to get back on track. During games you can’t really help it out but can learn from your mistake. Test cricket isn’t easy, you have to bowl in one area consistently for a lot more time and you can’t afford to change the line. These are world class players and you can’t give them enough room.

“A lot of damage has been done with no balls and those dropped catches. It makes you disappointed, but then you can’t do much about it because it’s part of the game. You can’t stop bowling if anyone dropped your catch but you come in hard and create more chances. It happens in cricket and that is what the learning curve is for us. We have to regroup and come hard with the ball next time.”

Suryakumar rises to No. 2 in T20I batting rankings, within two points of top-ranked Babar
Clean Hands: The best catches of the Dettol T20Is
Tamim: ‘Poor catching had to cost us at some point, today was the day’
Bumrah to miss Asia Cup due to back injury
Blair Tickner and Ben Sears cut through Netherlands as New Zealand defend 148