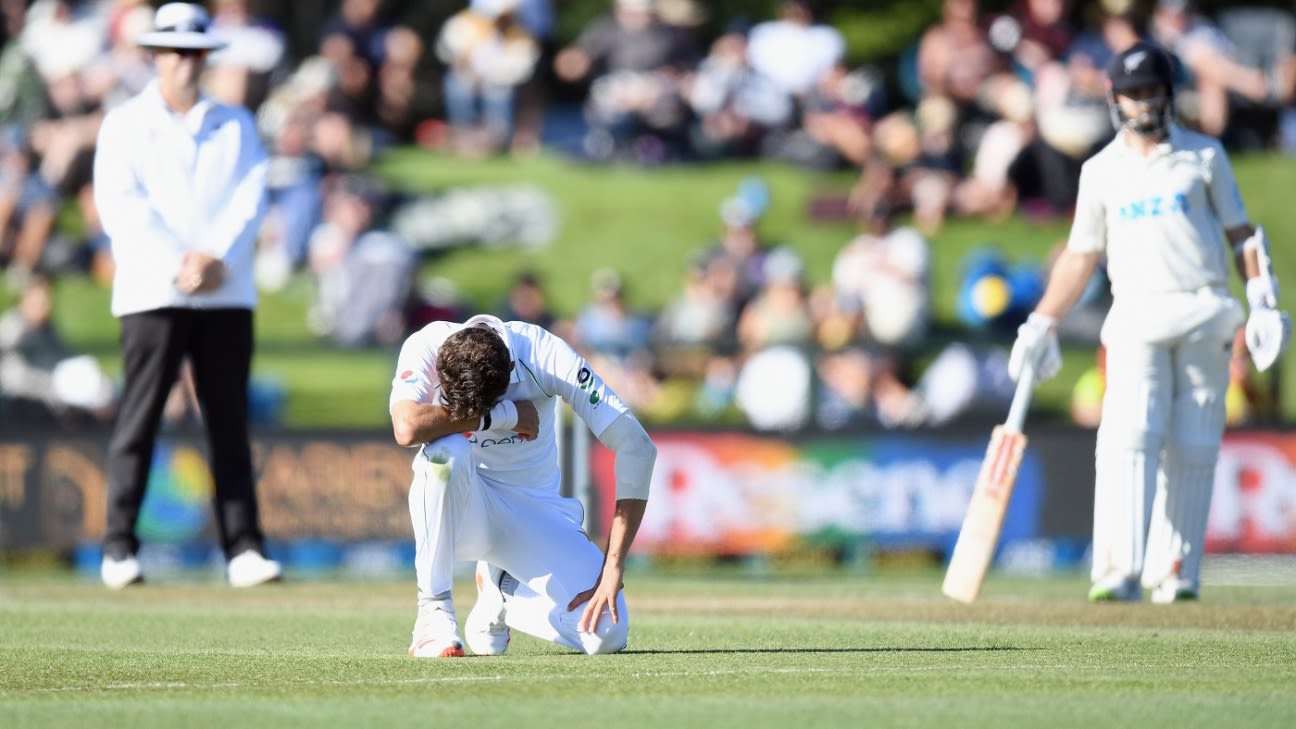 Mohammad Abbas admitted dropped catches by Pakistan that allowed New Zealand to surge into a position of dominance in the second Test proved to be “quite frustrating”. New Zealand were 286 for 3 at the end of the second day’s play of the second Test in Christchurch, just 11 runs behind Pakistan’s first-innings 297 all out and with Kane Williamson (112*) and Henry Nicholls (89*) going strong.

Nicholls had his share of good fortune as well, caught superbly when on 3 by captain and keeper Mohammad Rizwan in front of first slip, only to find that Shaheen Afridi had over-stepped and it was a no-ball. Later on, when Nicholls was on 86, Afridi drew him into a drive with the ball seaming to take the edge, but Rizwan dropped a straightforward chance to his left.

“It was a tough day for us. As a bowling unit, if your fielders drop catches, it’s very costly in Test cricket,” Abbas said. “Playing against world-class players and then dropping their catches, or the one caught which was caught on no-ball, is quite frustrating. For a bowler, it gets really difficult to get them again. He [Williamson] is the No.1 batsman in the world and if he gets a chance, he is going to make us pay and make the most of it. We had some plans against him, but he played very well. He took his time and then when he was set he got some runs.”

New Zealand batting coach Luke Ronchi agreed that his batsmen had some luck, but said that was part of the game.

“That’s part of cricket anyway, you’ve got to ride your luck,” Ronchi said. “Henry’s had a couple of innings now where there’s been a few chances but that’s just the nature of the game. And when you’ve got someone like Kane Williamson out there, you always know you’ve got a pretty strong rock to change the tide of an innings. It was a tight little period there, but we’ve known through the summer that if you work through those little periods, and you control as much as you can that as time goes on during the day, you can make the most of it later on.”

Ronchi said that given the nature of the tracks New Zealand play their Test matches on, it was expected that there would be more periods of ball dominating bat than the other way around.

“We play on pretty green wickets the majority of the time, Test cricket in New Zealand,” he said. “So more often than not, the bowlers are going to have lengthy periods of time when they are going to be on top of you. You have to just accept that and say, ‘Well, if you play and miss you play and miss. If you nick it and they drop it, it’s a chance to keep going.’ It’s probably going to happen more often than not, so it’s just about letting go of whatever’s happened and push forward with what you’ve got in front of you.”

New Zealand battled through the first two sessions of the day, capitalising on the third. They scored 66 for 2 in 25 overs before lunch, added 79 runs in 26 overs for the loss of one more wicket between lunch and tea, and then reeled off 141 runs in 34 overs in the last session.

Ronchi identified the period just before tea, when Pakistan bowled part-timers Shan Masood and Haris Sohail, as the one in which the momentum shifted.

“If you look at the way the day panned out, that little period before tea changed the momentum of the day,” Ronchi said. “I think that got our guys going and then straight after tea, Kane and Henry kicked it into gear. They were brilliant. To finish off at 280-odd at the end of the day and still only three down is a fantastic finish for us.

“It looked like the new ball was the hardest time (for batsmen). It does a little bit more. Also when the ball softened, the part-timers and medium pacers came on which gave the guys a bit of an opportunity to change gears and mindsets. Changed massively around that period.”