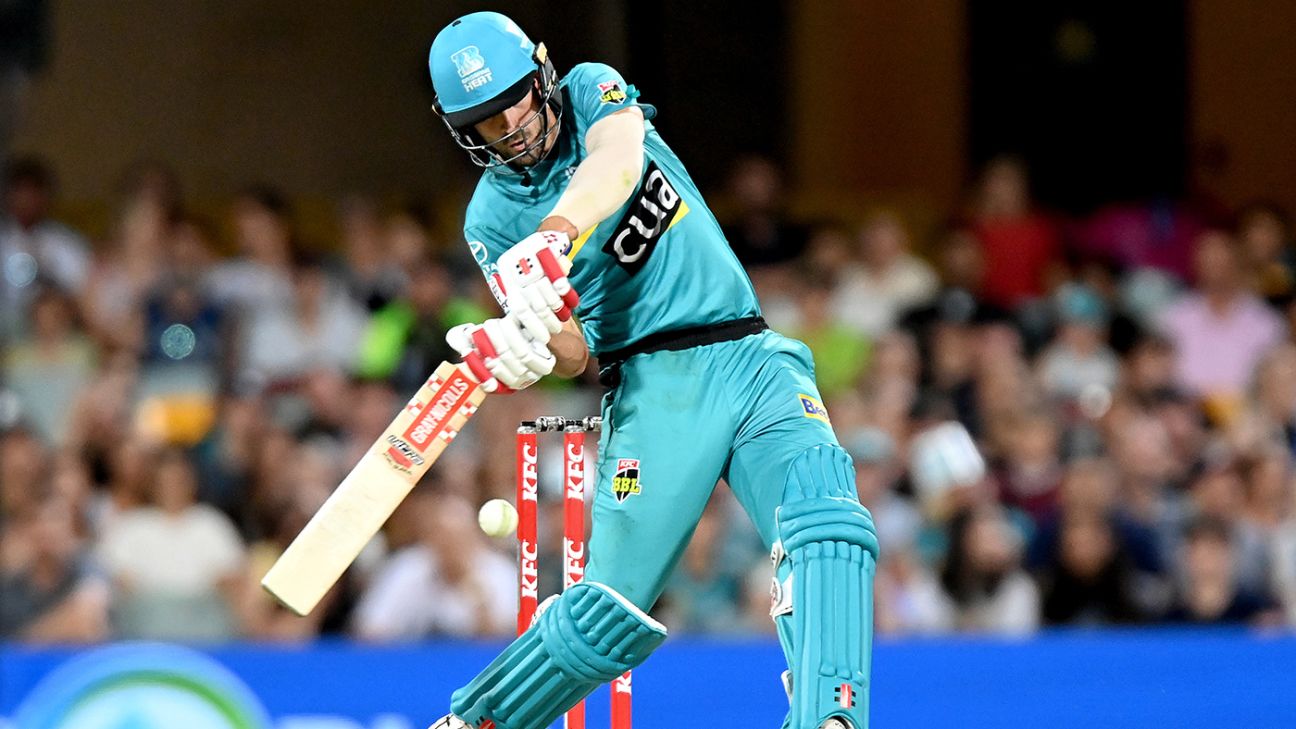 Fifties from Joe Burns and Joe Denly helped Brisbane Heat take all available points against second-placed Sydney Thunder and move to sixth on the table after seven games. On a quick, batting-friendly surface, Mujeeb ur Rahman‘s wickets and exceptional fielding also played a part in Heat’s win as Thunder struggled to sustain any surges during their batting innings due to the five wickets he was involved in. With a decent start from openers Max Bryant, and the returning Chris Lynn, Heat set up their chase of 175 nicely before sealing the points – they beat Thunders’ 10-over score in 8.1 – to go over Perth Scorchers on the table.

In command, a wobble, and then three points

Nathan McAndrew and Adam Milne strangled Bryant and Lynn in the first few overs of Thunders’ defence of 174, but a couple of lapses provided enough room for Lynn to let loose. The opening stand was 37, and neither opener made it out of the powerplay, but they had done their jobs as Heat got 61 in six overs.

Burns, coming in at No. 4, took charge from there as Denly took a more patient approach. There was none of the tentativeness in Burns’ innings on Monday that we’ve seen in his recent Test innings – at every point, he looked not only to score, but knew exactly the scoring options to use. In this case, the best options were generally behind the bowler and Burns milked that area with both horizontal-batted swats and check-drives when the bowlers erred full. It kept the momentum from the powerplay as Heat marched towards the target.

Denly’s flourish came late, but with strong effect. Two swept sixes and a four against Tanveer Sangha in the 15th over took him to fifty, and brought Heat’s required rate to under run-a-ball. But an attempt to hit out meant he was stumped in the same over, and Lewis Gregory was out next ball pulling straight to deep midwicket.

Heat were well ahead of the rate but the wickets brought nerves. To counter them, and in a bid to take legspinner Sangha – who was on a hat-trick – out of the attack, they opted to take the Power Surge after 16 overs. That forced Thunder to bring on their fast bowlers, and Burns and Jimmy Peirson used that time to tick away against the required runs. Burns wasn’t there when the win was brought up at the start of the 20th over, but his fifty had taken them through.

Hales and Ferguson keep it smart

Before all of that, Thunder had elected to bat but lost Usman Khawaja off the second ball. The left-hander got a top edge looking to swat Xavier Bartlett over midwicket. Wicketkeeper and captain Peirson was caught in two minds as he and Mujeeb, from short fine leg, converged on it and came dangerously close to a collision. Ultimately, it was the latter who kept his eyes on the ball running backwards to slide and grab to his left as Peirson withdrew at the right moment.

That wicket didn’t affect Alex Hales at the other end, however, and the opener continued to display his stellar form this season. Having taken a few overs to get a sighter, Hales unleashed some characteristic shots on the up in the third over against Bartlett. That resulted in two fours and a disdainful six straight over the bowler to inject momentum to their start.

Callum Ferguson, at No. 3, was his usual busy self without being too explosive. His game was built around dabbing deliveries into the vast outfields square of the wickets, a tactic that kept the runs ticking. They turned 1 for 0 into 1 for 77 by the ninth over.

Mujeeb came into the game with seven wickets in his last two games, but Hales was willing to take him on. He smoked a pull over deep midwicket in the middle of the ninth over, but Mujeeb came back the next ball with one that got big outside off. Hales, who was on top of the BBL run cheers by this point, could only manage to chop to short third man.

In his next over, Mujeeb got Ferguson swiping out to deep midwicket. And just as Sam Billings had gotten going, he affected a sharp run out off his own bowling. Billing, running down the pitch, was beaten in flight and pushed the ball back down the pitch to Mujeeb. He couldn’t turn back quickly enough as Mujeeb sent a throw back on the bounce and caught him short on the dive. Thunder were 5 for 108 in the 14th over at this point. Mujeeb finished the night with two wickets, two catches, and a run-out. Ultimately, that proved to be a big difference.

After taking some time to arrest the freefall, allrounders Daniel Sams and Ben Cutting tore into Thunder with a Power Surge in the 17th over. They made 35 in that period and eventually had four sixes and four fours between them. That ramped Thunder up to 174 at the end of the innings. Sams, though, was struck on the helmet during his cameo and didn’t come out to bowl due to a concussion. He was replaced by Chris Tremain.

For Heat, left-arm spinner Mathew Kuhenmann was replaced after one over by an X-factor sub for the second consecutive game. Lynn made his comeback in Kuhnemann’s place.

In case you don’t know me: Cameron Green | Direct Hit
Ross Taylor returns for opening round of Ford Trophy
Rob Key: Rehan Ahmed’s Test fast-tracking was the plan all along
Steve Waugh: ‘The public has almost overdosed on cricket’
West Indies opt to play for draw on final-day tussle