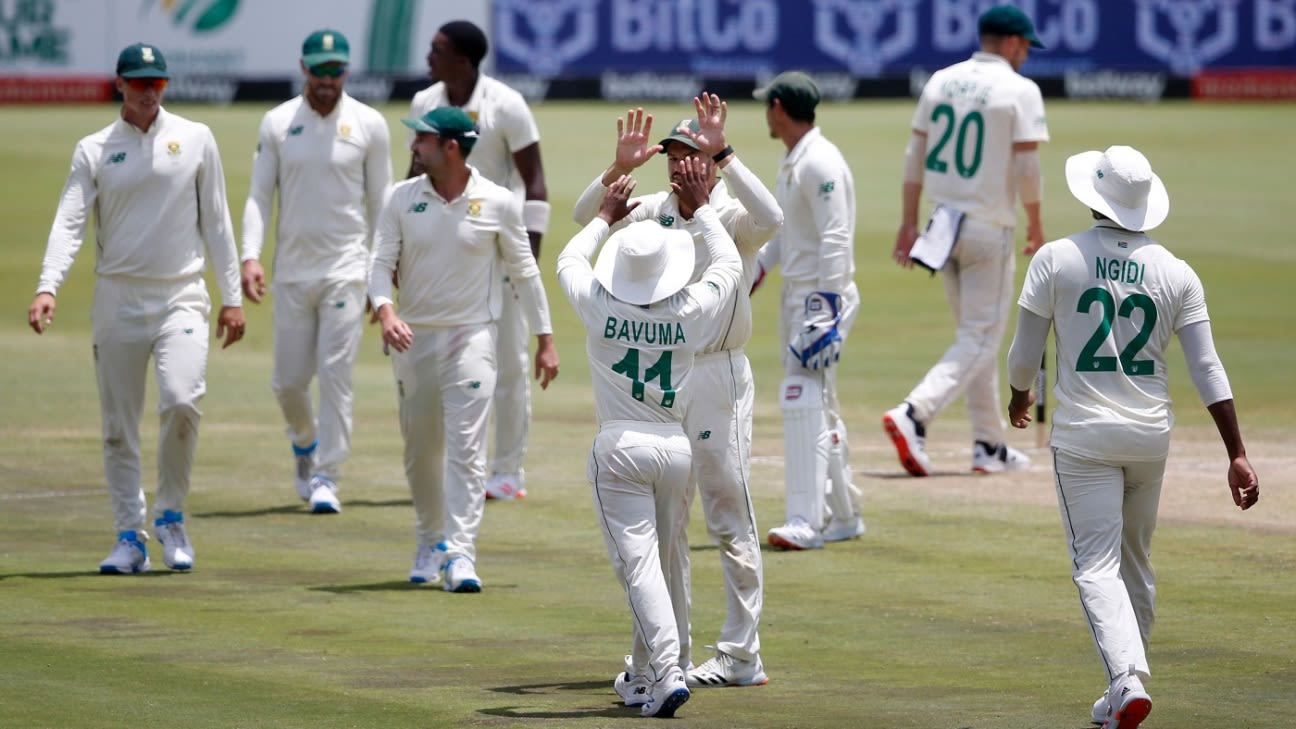 For two days, Sri Lanka were competitive at Centurion. But with half their resources sapped through injury, and even several batsmen struggling, it would have taken a cricketing miracle on par with Kusal Perera’s Kingsmead 153 for the visitors to even remain in contention.

Now, no fewer than seven members of their 21-strong squad are under injury clouds. Kasun Rajitha, Lahiru Kumara, Suranga Lakmal, Dhananjaya de Silva, Oshada Fernando and Dinesh Chandimal have all been ruled out of the match, while legspinner Wanindu Hasaranga is also in doubt due to the thigh injury he sustained diving on the ball at Centurion. With Angelo Mathews not even having made the trip due to a busted hamstring, Sri Lanka will be without at least seven – possibly eight – first-choice players at the Wanderers. This is a venue at which they’ve only previously had disasters – two innings losses, both inside three days.

South Africa may be slightly wary of a beleaguered Sri Lanka team, following the 2019 tour in which a depleted Sri Lanka beat them 2-0, but so resounding was their victory at Centurion, that it is difficult not to think of this as a golden opportunity to turn around their poor recent series record. South Africa have lost each of their three most-recent Test series, going back almost two years (even with last week’s win, they’ve lost eight of the last ten Tests).

Not only are they virtually at full strength, with even Kagiso Rabada now available for selection (though they are not sure whether they will throw him straight into a Test), several of their players are also in excellent touch. Aiden Markram hit a fluent half-century at Centurion, after coming off excellent first-class performances. Dean Elgar got runs as well, and Faf du Plessis produced his biggest Test innings, falling one short of a double-ton. Their attack ran through Sri Lanka in the second innings, and against a Sri Lanka top order missing some of their best players of seam bowling, South Africa are well-placed to wreak havoc on one of the fastest, bounciest tracks on the planet.

In full flow, Aiden Markram is South Africa’s most watchable batsman. His drives are crisp, and when he is timing the ball well, even his pull shot is pretty. Very early in his Test career, Markram was talked about as South Africa’s next great batsman, potentially, and when the big hundreds came, including his impressive 152 against Australia at this very venue, Markram seemed to be on track to fulfil those expectations. There’s been a cooling off since then, as a questionable technique against spin (among other things) has come into view. But although he only made 68 at Centurion, he seemed the most fluent and well-grooved of South Africa’s batsmen, scoring quickly to set the tone for South Africa’s innings. He will hope more runs at the Wanderers will help start a more stable and consistent period of his career.

Although it was a hundred in South Africa for Sri Lanka A that initially helped bring Dimuth Karunaratne into the Test team, Karunaratne’s Test record in the country has been poor. In 12 innings, he has made just one half-century – a second-innings 50 in Sri Lanka’s innings defeat at this venue in 2017. In general, Karunaratne has been weaker in SENA countries – his New Zealand average of 36.08 the highest of that lot. There will be plenty of pressure on his captaincy with such a depleted and inexperienced side expected to take the field, but Karunaratne will also be desperate to get himself to a score.

The Wanderers has a reputation of being South Africa’s most seamer-friendly venue and it should remain true to form for this match. Expect pace and bounce, on a green surface, helped by significant rain in the lead-up to the match. The weather will be slightly cooler than it was in Centurion with the Highveld’s famed thunderstorms forecast to cool things off.

Sri Lanka don’t really have a lot of options here. Minod Bhanuka and Asitha Fernando are likely to debut. Lahiru Thirimanne and Dushmantha Chameera are also expected to come into the XI. If Hasaranga can’t play, Lasith Embuldeniya seems likeliest to replace him.

If Rabada is fully fit, you could hardly blame South Africa for picking him but it will be tricky to decide which one to leave out from Centurion Test. It may be Lungi Ngidi, who was nursing a niggle ahead of the first Test but bowled decently at SuperSport Park or Anrich Nortje, who sustained bruising on his foot from stopping a ball. Lutho Sipamla came back well from an expensive first spell and may be given the opportunity to show what he can do on his new home ground while South Africa will also be waiting on the fitness of Glenton Stuurman. South Africa will be without the uncapped Raynard van Tonder, who fractured a finger on his left hand during a training session on match eve. The middle order batsman has been released from the squad for rehabilitation, but his absence is unlikely to affect the XI South Africa would want to field. Barring any other last-minute injuries, the batting line-up should be unchanged.

Glenn Maxwell still hungry to succeed in Test cricket
Capsey, Brunt and Jones have England on the brink of a place in the semi-finals of the Commonwealth Games
Kyle Abbott extends Hampshire stay with new contract
Ireland bowl; Miller returns for South Africa
Litton Das ruled out for a month due to hamstring injury, in doubt for Asia Cup