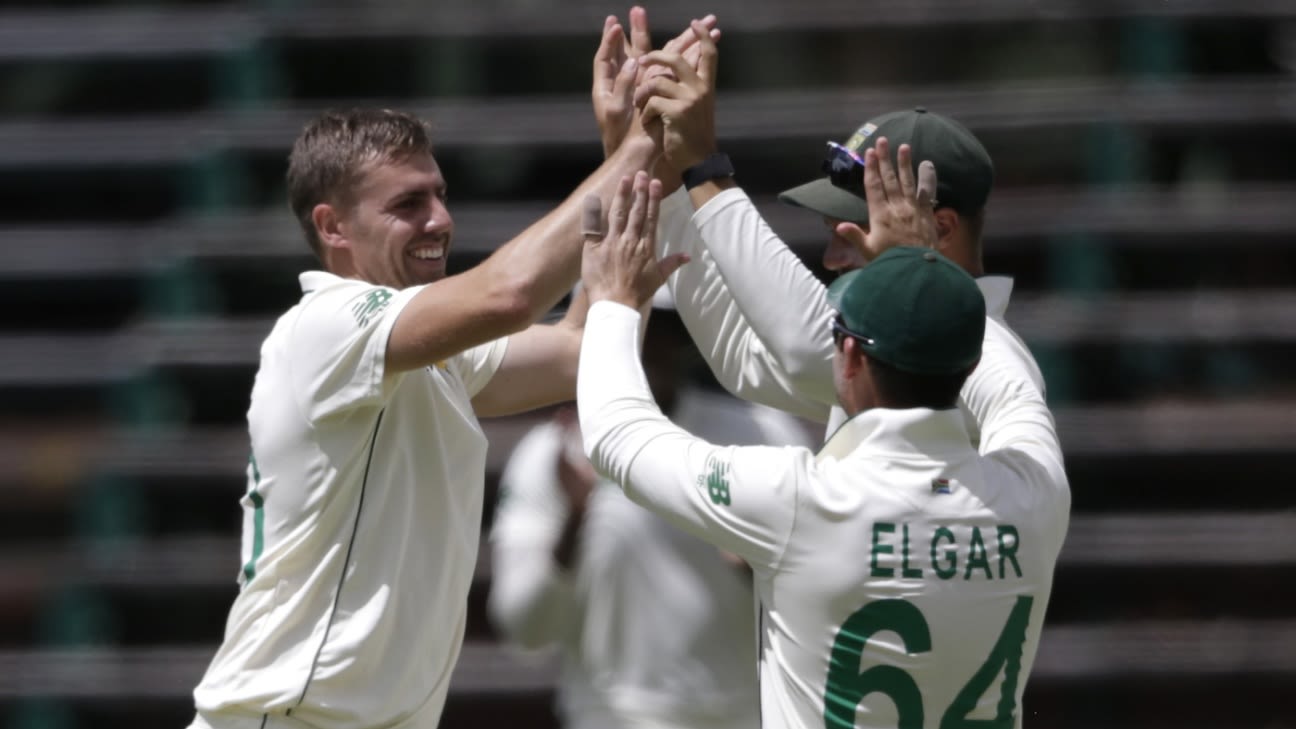 Let’s get this out of the way: of all the things CSA has to worry about, Anrich Nortje signing a Kolpak deal is not one of them.

We’re mentioning it both because of his career-best haul and because it’s that time of year and against this opposition when South Africa’s most promising quicks have historically sprung surprises about the directions of their careers. Kyle Abbott signed off at Newlands during the New Year’s Test against Sri Lanka four years ago and Duanne Olivier’s last appearance came in February two years later, after an altogether different Sri Lankan side became the first Asian team to win a Test series in South Africa. But Nortje is staying – or at least he isn’t going to the UK.

Britain’s now-concluded divorce from the European Union has brought the Kolpak-era to an end, and in fact makes Abbott and Olivier eligible to play for the country of the birth again, but unless the Major League in the United States can lure Nortje, he is all South Africa’s and thank goodness for it.

Nortje is everything South Africa wants from a headline fast bowler. He gets the speedometer inching towards 150kph and occasionally beyond, he has a mean bouncer, and has shown an ability to adjust his lengths to bowling fuller when required. All that would be fearsome on its own, but it is even more effective when he is able to operate within an attack that provides a foil. That’s what South Africa showed on the opening day at the Wanderers.

Despite their inexperience, Wiaan Mulder and Lutho Sipamla have adapted quickly to their roles and it was with their support that Nortje enjoyed most of his rewards. Mulder, specifically, described himself as a holding bowler in the first Test, which gives Nortje the freedom to “scatter it” a little, as Shaun Pollock put it, and invite the batsmen to attack even more. “It’s very important to bring the run rate down and bowl dot balls because that generally creates wickets,” Nortje said.

Mulder’s miserliness brought rewards for himself first, with a pre-lunch spell of 3 for 1 in three overs, and for Nortje later. Post-lunch, with Mulder at one end, Nortje took 2 for 11 in four overs, bowling slightly fuller and getting both Niroshan Dickwella and Dasun Shanaka to play away from their bodies without moving their feet. He returned for two more to end the Sri Lanka innings with Sipamla working his end with deliveries outside off, one of which found Wanindu Hasaranga’s edge.

Ultimately, South Africa didn’t do anything exceptional, which Nortje acknowledged. “We try to keep things as simple as possible. We are not trying to make miracles when we go out and bowl,” he said.

And that, along with the way the opposition batted, makes it difficult to laud this effort, despite it producing Nortje’s career-best figures.

Sri Lanka came into this match ripe for being railroaded. They are without seven first-choice players, they opted to bat first on a surface that has a reputation for being unkind to batsmen who are wary of bounce and even though it wasn’t as green as it could have been, in their two previous visits here, they have not managed to cross 200.

Their approach quickly made clear they might fall short again. While there’s much to admire about attacking intent – and Kusal Perera showed that it can work – the Wanderers is a surface that demands batsmen are able to leave well. The wide ball, the half-volley and the ones that stray down leg, like those Lungi Ngidi delivered, can be punished but anything pitched up, on third, fourth and fifth stumps needs to be treated with care, and Sri Lanka didn’t do that.

Apart from Dimuth Karunaratne, done by a lifter, and Dushmantha Chameera, who was bounced out, the others threw their bats at deliveries they could have left alone. If they trusted their defences, perhaps they would have been more cautious and willing to spend time at the crease. Instead they opted for the same get-runs-before-you-get-out strategy they employed in Centurion. There, it brought them their highest total in South Africa against an attack that was still finding its feet. Here, they had no such luck.

“At Centurion, we were maybe too wide at times and we bowled both sides of the wicket,” Nortje said. “Here, we wanted to keep it tight and get into the channel. That also created some opportunities. We want to have some bowling partnerships and try and get as many dots as possible and then they will have to look to score runs.”

South Africa’s bowling still has a lot of work to do, particularly Ngidi who has not looked his best in this series, but they have found depth in their reserves and a balance to the XI that allows them to play four quicks, who are all wicket-takers. If Mulder and Sipamla stay injury-free, Ngidi finds form, Kagiso Rabada returns, Glenton Stuurman and Migael Pretorius get opportunities and Nortje continues to have a licence to thrill, South Africa will not just get freedom from Kolpak but may not even need to call on the Kolpak-returnees.

Abbott, Olivier and Simon Harmer are the trio that come to mind immediately but all of them have been engaged as overseas players for their counties, which would limit their availability for South Africa. And that’s just the practicality of it. Their departures left a bitter taste in the mouths of administrators here and they would all need to find their way back into a team that has moved on, and also has transformation targets to adhere to. When they left, they all cited security, in both the financial and cricketing senses, as one of the main reasons for them leaving. With an IPL deal that can only increase and a fast-growing reputation as South Africa’s mean man, it’s Nortje who has those things now.

Rob Key: Rehan Ahmed’s Test fast-tracking was the plan all along
Afghanistan opt to bat; Dhananjaya Lakshan in for Sri Lanka
SLC to launch its own T10 league in June 2023
Luke Wright named as England Men’s new selector
India clinch series after rain-hit tie in Napier