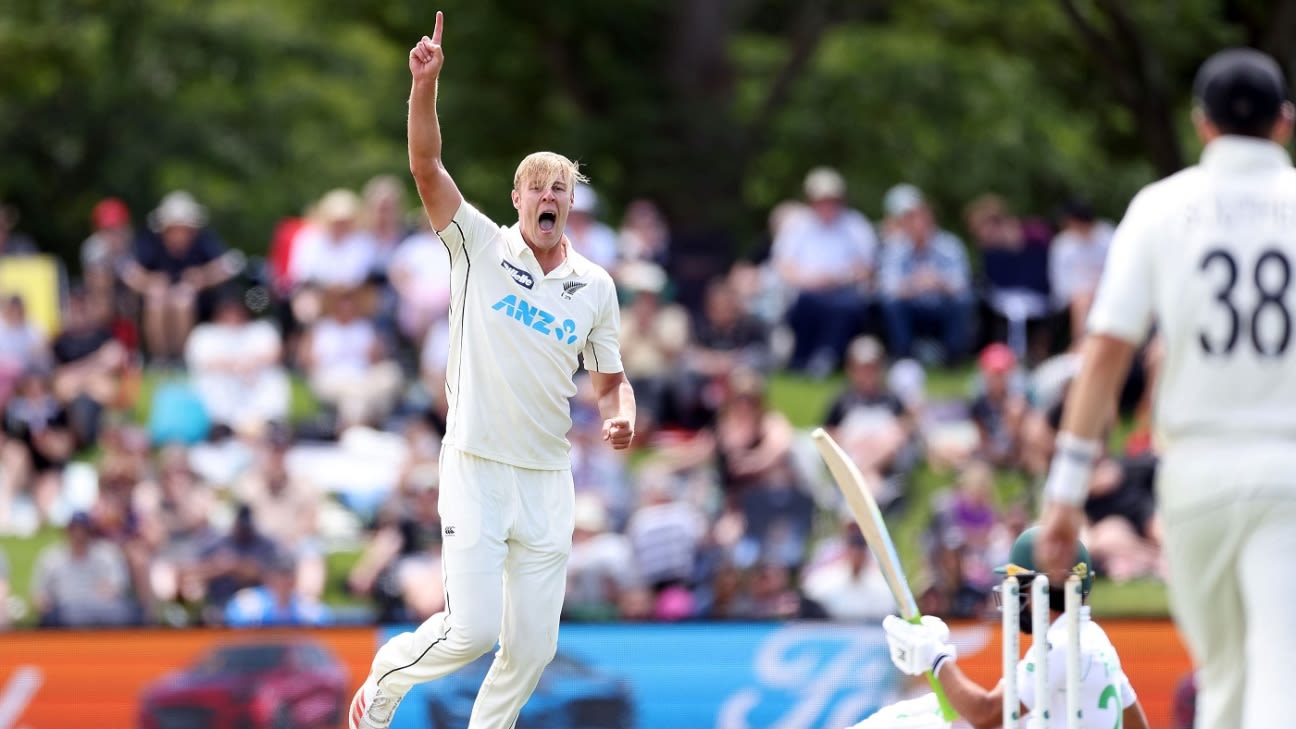 Kyle Jamieson, meanwhile, reckons Pakistan have a ‘par’ total on a pitch made for quick runs and quick wickets

Azhar Ali believes Pakistan’s first-innings total of 297 is “decent and enough to build on”, given the grass cover on the pitch at Hagley Oval in Christchurch. That said, he felt there were runs to be had on the surface provided the batsmen stayed focused throughout, and left balls on length.

Azhar fell seven short of scoring his 18th Test hundred, after anchoring two vital partnerships that revived Pakistan after they had stumbled to 83 for 4 shortly before lunch. First he added 88 with Mohammad Rizwan, who counterattacked with a brisk 61 off 71 balls, and then another 56 for the sixth wicket with Faheem Ashraf.

Pakistan scored quickly throughout their innings, particularly in the post-lunch session when they made 130 runs at 4.33 per over.

“I knew that the first couple of hours will be tough and obviously when you see this much grass on the pitch you have to focus for a longer time,” Azhar said at the end of the day’s play. “We were positive, especially when the ball is in your zone you must score off it, on these kind of wickets, because you’re going to get one good ball at some stage. You have seen the run rate was good so it’s a good enough pitch to score runs but obviously in between you need to leave on length, which was the key in my batting.

“If you look at the pitch it’s a decent total, especially batting first. It’s been tough all day so we feel we have enough runs on the board and we can build on it tomorrow.”

Kyle Jamieson was New Zealand’s most threatening bowler on the day, picking up his third five-wicket haul in just his sixth Test match. He had the top order reeling with a spell of 8-3-26-3 before lunch, and ended the innings with figures of 5 for 69 in 21 overs. He looked unplayable at times, especially when he dismissed Fawad Alam with a short ball that came back into the left-hander and reared towards his head.

“The guy is quite tall and hitting good lines and lengths and swinging the ball both ways, so it was fun and tough as well,” Azhar said of his contest with Jamieson. “With this height we obviously needed to consolidate as much as we can. But when the ball is there to hit and whenever we got the opportunity we did score boundaries as well. But it was a tough spell to negotiate and at the end of the spell Rizwan got out when he was hitting the ball quite nicely but as far as that partnership was concerned we were very happy, especially the way we scored the runs during that period, it was fantastic.”

Nearly 58% of Pakistan’s runs came in boundaries. Jamieson, who conceded 12 of the 43 fours struck on the day, said there had been more scoring opportunities for the batsmen here than during the first Test in Mount Maunganui because the pitch here had demanded fuller lengths from the bowlers, and consequently afforded them a smaller margin for error.

“It was frustrating,” Jamieson said of the Azhar-Rizwan partnership. “I guess the difference between Bay Oval and here is, our natural length at Bay Oval was back a little bit, so when your natural variation is slightly fuller or slightly wider they don’t score as quickly, whereas at grounds like this, when your length needs to be fuller, it does provide scoring opportunities. It kind of felt like we were beating the bat a lot and they were also scoring freely, and that’s a tough one to get your head around. That’s two of probably their best batters, and it was I guess a pivotal time to pull them back and get one of them back in the sheds.”

Jamieson said the pitch at Hagley Oval, over recent seasons. has usually lent itself to matches moving at pace, both in terms of runs and wickets.

“I still think it’s down to the lengths you need to bowl,” he said. “We’ve seen in games gone by here and certainly in domestic cricket as well, that when your length is fuller, it’s pretty hard to nail that every time, and your natural variation, which is just either side of that, it does provide scoring opportunities. Through my five or six years I had playing domestic cricket down here, I guess that was certainly the case, where guys scored quicker but things happened quicker from a bowling point of view as well.”

Going into the second day, Jamieson agreed with Azhar’s assessment about Pakistan having a decent total, but was confident his side could handle the tests thrown at them by Pakistan’s bowlers.

“I think it’s a good one,” he said about Pakistan’s total. “I think it’s it’s probably par. I think they played well but like we saw, it was still good enough to to score and it wasn’t impossible to bat. So, you know, there’ll be challenges, I guess, in terms of the ball moving and potentially with bounce and and sideways movement, but it’s nothing new than what our guys have seen for four years and years. It’s a reasonable total and I think how we start will be pretty important.”