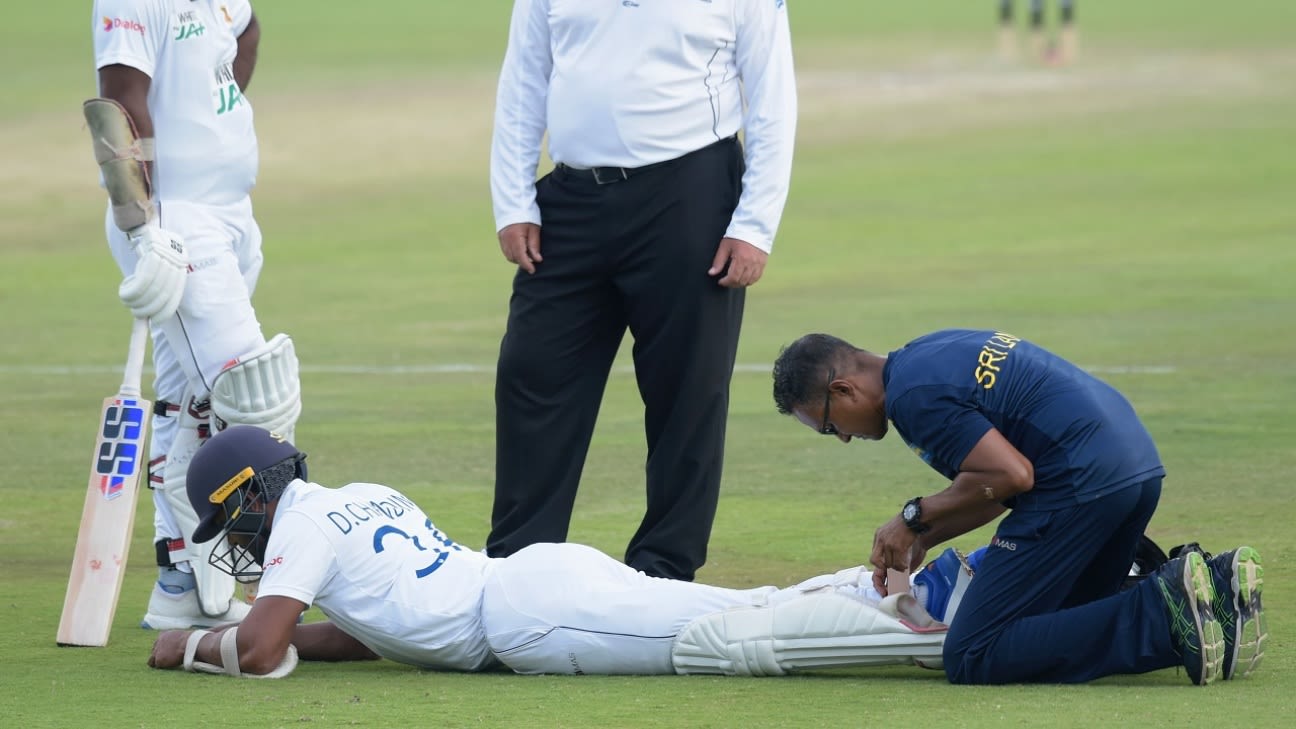 Suranga Lakmal, Kasun Rajitha, Lahiru Kumara and Dinesh Chandimal are all almost certain to miss Sri Lanka’s second Test against South Africa, due to injury. Dhananjaya de Silva had already been confirmed to be out of contention.

The even worse news for Sri Lanka is that of all these players, only Chandimal and Lakmal seem likely to be fit in time to return to the XI for the first Test against England, which begins on January 14.

Chandimal, and fast bowlers Rajitha and Kumara all picked up groin injuries while playing the first match, after de Silva strained a tendon in his left thigh on the first day. Lakmal had tweaked a hamstring in the approach to the first Test and did not play that game. He still hasn’t recovered.

“What the doctor says is that when you’re tired, the first area that feels the strain is the groin,” team manager Ashantha de Mel told ESPNcricinfo. “I’ve never been on a tour with so many injuries. We’ve not played a Test match since February, so that must have had an effect.”

ALSO READ: Sri Lanka ‘could have dominated’ but for injuries – Karunaratne

Lakmal’s absence will be a particularly substantial blow. Not only had he been Sri Lanka’s best seam bowler on the team’s two previous tours of South Africa, he’s also by far the most experienced quick in the squad. Without him, Sri Lanka’s seam attack will likely comprise Dushmantha Chameera and Vishwa Fernando, who have played fewer than 10 Tests each, and Asitha Fernando, who will be on debut.

“Suranga did a fitness test earlier today and failed it,” de Mel said on Friday. “We’ll have to start upping his workloads and build him up, otherwise he could get injured again.”

Sri Lanka have taken 21 players on tour, for exactly this kind of contingency (players can’t just be called up from Sri Lanka because they would need to quarantine before entering the bio-secure playing bubble).

From among the batsmen who didn’t play the first Test, Lahiru Thirimanne is likely to come into the XI, as well as Minod Bhanuka, who will be on debut. Neither Thirimanne or Bhanuka are known for their bowling, however, so the loss of de Silva – who was arguably their most fluent batsman at Centurion – will still not quite be covered.

The second Test starts on Sunday. South Africa won the first game by an innings and 45 runs.