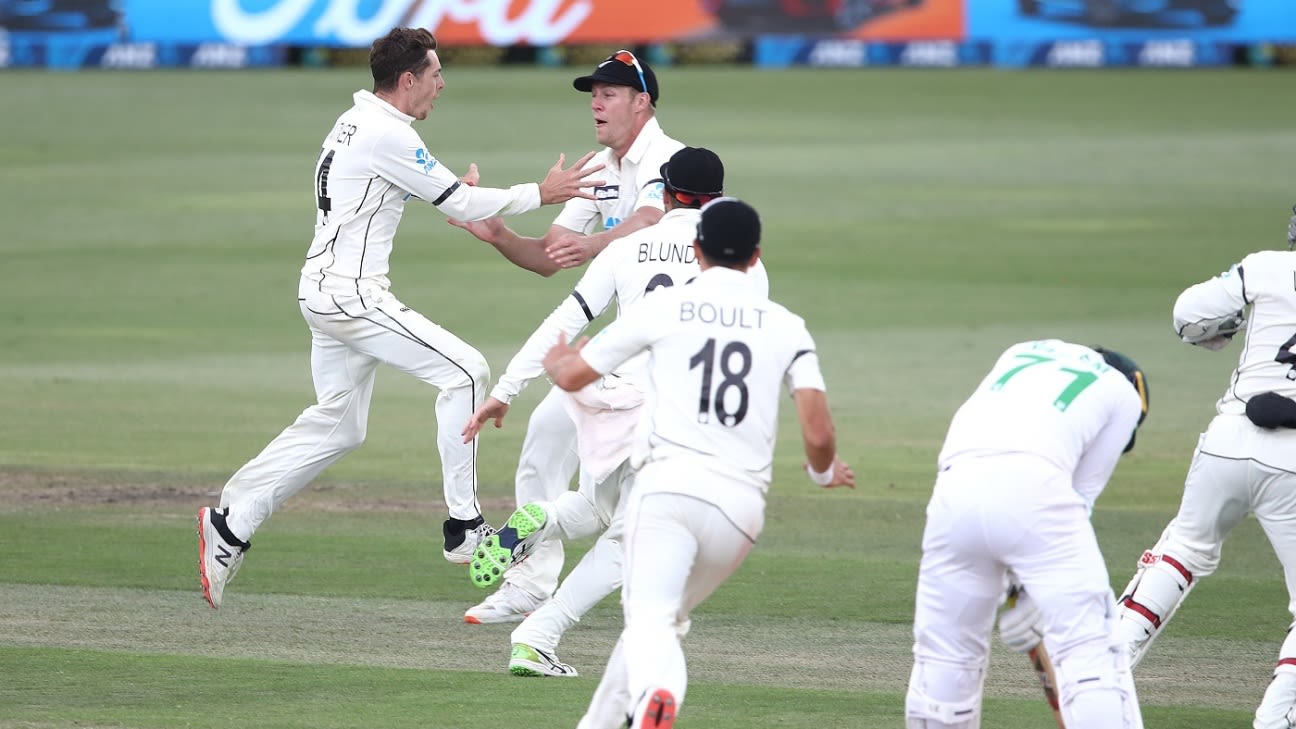 When the seamers were out of ideas, he stepped up to apply the finishing touches with his subtle variations

Mitchell Santner‘s Test future seemed uncertain at the start of 2020 when he was dropped following the Australia tour as part of a spin overhaul. However, he returned and ended the year with a crucial double-strike against Pakistan that capped a last-gasp win for New Zealand at Bay Oval. Santner’s red-ball future as a wicket-taking option isn’t certain yet, but he has done his bit to help push New Zealand towards the World Test Championship (WTC) final at Lord’s in 2021.

For the most part of his second-innings spell in the first Test against Pakistan, Santner lacked control, straying with his lines and lengths. The left-handed Fawad Alam pulled and cut his way to 32 off 34 balls against Santner. The left-arm fingerspinner also sent down a dirty log-hop to Mohammad Rizwan, which was duly swatted to the midwicket boundary.

However, when the pace quartet couldn’t quite find a way past a stubborn lower order, it was Santner who stepped up to apply the finishing touches with his subtle variations. After beating Mohammad Abbas with a delivery that gripped and turned past the outside edge, Santner pinned him lbw with a quicker arm ball.

New Zealand’s premier seamers Trent Boult and Tim Southee then had a crack at Pakistan’s last pair in tandem for five overs, but Naeem Shah and Shaheen Afridi somehow held them off. Kane Williamson turned to Santner again, and on cue he had Shah scooping a return catch off a loopy delivery that stuck in the pitch.

“We remained patient throughout – even in the first innings,” Santner said at the post-match media conference. “So, you know, like Kane said, we believed if we get one, we could get a few. It was nice to see a couple turn at the end, and to just contribute to the effort was good as well. It obviously got a little bit closer. Kane said that the way two seamers got the breakthroughs got us back into the game, so it was nice to help out as well in the last couple of overs. I guess my role there was fire it into the wicket and hopefully one skid or one spin.”

Santner also made an impact in the field when he nailed a direct hit from the deep to cut short Rizwan’s first innings at 71. A day after that dramatic finish, head coach Gary Stead was asked if Santner makes things happen for New Zealand.

“Yeah, I think, if you look at defining moments in the match, the Mitchell Santner run-out in the first innings actually swung things back and gave us a chance to have a decent lead and then be able to leave something that we wanted to,” Stead said. “Mitch is a great fellow and he’s got a lot of skills and I guess he’s often someone people point to that he doesn’t necessarily get results in New Zealand, but New Zealand for spin bowlers is a tough, tough place to play in and he offers a lot to our team.”

Sure, Santner has had less-than-ideal outings across the Tasman Sea, but has been an unsung contributor to New Zealand’s dominance at home. New Zealand have been unbeaten in their last 16 Tests at home, and Santner has featured in six of those matches, scoring 282 runs at an average of 40.28 and picking up 10 wickets at an average of 29.30. The major highlight was his career-best 126 from No.7 and 3 for 53 against England, also at the Bay Oval in 2019.

Ajaz Patel had previously been identified as a more attacking spin option after his success in the UAE and Sri Lanka, but the rapid rise of Kyle Jamieson has now shaken up the combination, with New Zealand now leaning towards four frontline seamers and an allrounder. As for Patel, having suffered a calf injury, he has now been asked to prove his form and fitness in domestic cricket in order to work his way back into the national side.

In the injury-enforced absence of Colin de Grandhomme, Daryl Mitchell got the nod against West Indies before Santner made his comeback against Pakistan on a Mount Maunganui pitch that wasn’t dissimilar from an Asian pitch, according to Azhar Ali.

Santner sees himself fulfilling the allrounder’s role on such tracks, but also accepts that there may not be a place for him in the XI on greener pitches.

“We’ve seen on surfaces that we’ve come across before [where] the four seamers have done a great job,” Santner said. “On slightly slower wickets like this [Mount Maunganui], there’s probably a place. But then, obviously the batting is important as well. We’re not sure what we’re going to get at Christchurch – probably not similar to the one out there. Probably a bit more green.”