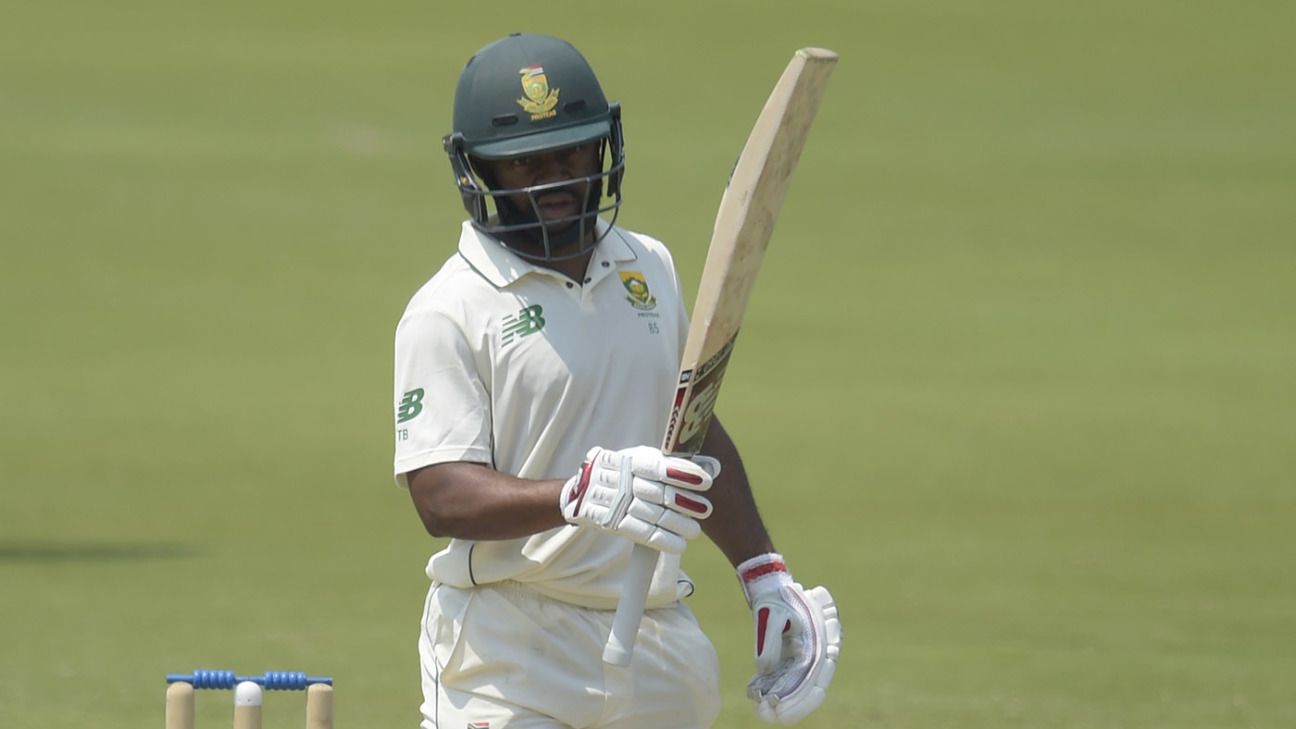 Temba Bavuma has acknowledged that walking after he played and missed on 71 in the Boxing Day Test “wasn’t the cleverest of things,” and hopes to complete “unfinished business,” in the second Test against Sri Lanka, which starts on Sunday.

Bavuma, who has one Test hundred to his name, scored five years ago, was well set at SuperSport Park when he flashed at a wide Dasun Shanaka delivery, tucked his bat under his arm and left the field without being given out. Replays showed no contact between bat and ball, and had Bavuma waited for the umpire or even sought a review if the decision went against him, he would likely have been able to continue his innings and may have been able to reach triple figures.

Though Bavuma seemed to regret the way his innings ended, in ever-measured fashion, he did not get too down on himself. “I would have wanted to score a lot more runs and opportunity was there,” he said. “I guess walking prematurely before the umpire had made the decision wasn’t the cleverest of things but it’s something that just happened in the spur of the moment.”

Instead, he sees a chance to put things right in the next match, which takes place at his home ground and is also the venue he came closest to adding a second hundred to his name. Three years ago, against Australia, Bavuma was stranded on 95* when Morne Morkel holed out. He has played two Tests there since, against Pakistan in 2019 and England last year, when he was recalled to the side after being dropped. His returns in those matches amounted to just 64 runs but several years of playing domestic cricket and captaining the Lions franchise in Johannesburg mean the venue remains a happy hunting ground for him.

“The Wanderers is where everything started for me – playing first-class cricket for the Lions. There’s good memories for me at the Lions and I guess I’d like to create more memories,” Bavuma said. “There is a feeling of unfinished business per se and opportunity is there to get in and get some runs. I would like to do so, and make it count.”

That said, run-scoring is unlikely to come easy. The Johannesburg pitch is usually hostile to batsmen, more so when a subcontinental team is touring and South Africa look to drive home their advantage. But Bavuma believes the home line-up are prepared for the fight.

“There’s pace, there’s bounce in the wicket and lateral movement,” he said. “Our bowlers relish those types of conditions and the batters as well. We are used to batting on wickets that are quicker and that are bouncy. Our techniques are suited to it and mentally as well – we are quite courageous in these types of conditions.”

But South Africa’s batting before the Boxing Day Test could not really be described in that way. In the year before they posted 621, their highest score in an innings in any format was 291, and their highest Test score 284. After being outspun in India, they were brittle at home against England and struggled to put partnerships or significant individual contributions together.

A depleted Sri Lankan attack gave South Africa a gap to put that right and now their task is to replicate their SuperSport Park performance.

“There hasn’t been a lot of consistency or confidence in our batting,” Bavuma said. “So I guess, the pressure was on batters, especially considering they are the senior guys within the team, to step up and lead the way. Fortunately, the guys were able to do so.

“It’s not every day when you get to score 600-plus. The challenge for most of the team will be to try and match that effort. The biggest thing about the batting is that the guys that got in, the guys converted, took their opportunity – more specifically Faf [du Plessis] – so the challenge will be that batters, for those who do get in, make sure that you go on and get a big score to put the team in a good position.”

And the more the runs come, the more those scoring them (apart from du Plessis) make their cases for the permanent Test captaincy. By the sounds of it, Bavuma is interested, after being called on by Quinton de Kock for advice several times in the field in the first Test.

“Quinny and I played quite a while together from provincial, age-group and there’s an understanding of each other in terms of our strengths and in terms of where we can help each other,” Bavuma said. “He has identified when someone can help him on the field with all the little soft issues. Any type of responsibility, I will take, I enjoy the leadership that’s come.”

De Kock has been put in charge of the South African Test team in a temporary capacity for this summer, while the selectors look for a long-term solution. After this series, de Kock will lead the side on a tour to Pakistan, which starts in late January, and in Tests against Australia at home, scheduled for February-March. That means South Africa will move through at least two more bio-secure environments over the next three months, something which Bavuma explained could take its toll.

“I didn’t enjoy it at the beginning, with the England (white-ball) series. I heard of it from guys but to experience it was another thing. I felt it was tough mentally – being restricted, not being able to do the normal things that you would do, to see the people that you would normally be able to see,” Bavuma said.

“Now it’s a bit easier in the sense that I’ve got an understanding and I know what to expect. The place here that we are being hosted at has also been very good. The hotel staff have been amazing in making us feel really at home. The guys as well. There has been a lot of interaction amongst the guys. Guys will do an activity that they are not used to. Like Fishing.

“The guys who don’t play golf are playing golf, on a simulator. The conversations amongst the guys is a lot more family-orientated, making guys a bit more comfortable. Bubble life is bubble life. It’s going to be with us for quite a while and I guess we are going to have to find ways of getting more used to it.”