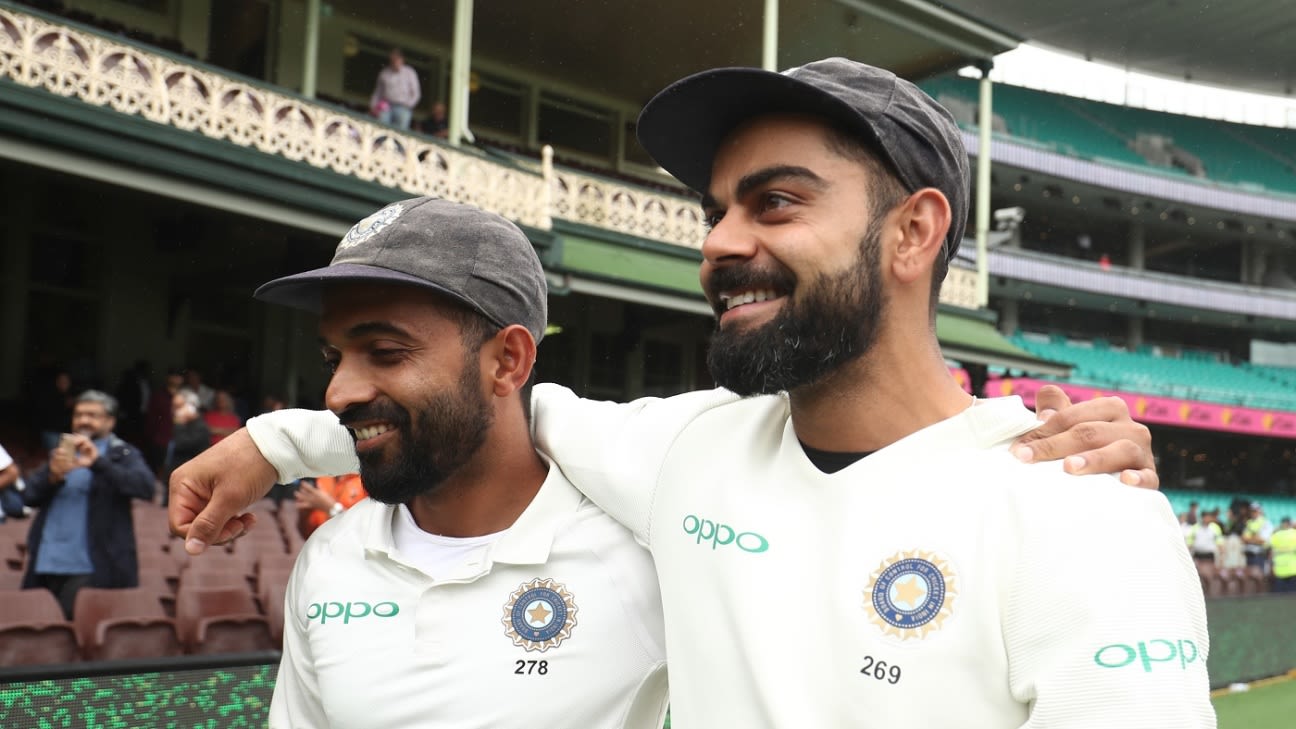 A single tucked to the leg side, no raised bat or arms, no plucking of stumps, no removing the helmet, just casually walking off knocking fists with others. Looking at Ajinkya Rahane, it might seem he had won against Railways Canteen Staff XI in a weekend club game and not against the No. 1 Test side in their own backyard a week after getting rolled over for 36. And that calmness of the stand-in captain has come in for praise from coach Ravi Shastri and spin frontman R Ashwin, who played a key role in the attack in the absence of two first-choice players.

“I think getting bowled out for 36 was never going to be easy in a country like ours,” Ashwin told Channel 7 after the win. “We are quite a proud cricketing country and losing Virat [Kohli] as well, him going back was a bit of a setback as well. We stuck on very well.

“Jinks [Rahane], Puji [Cheteshwar Pujara], myself and Jassi [Jasprit Bumrah], all of us, we got a great bonding inside the team. And Jinks’ calmness inside the dressing room really provided us that stability to go out there and express ourselves in this game, and a good first day set us on the road.”

At the press conference after the eight-wicket win at MCG, Shastri was asked if he thought Rahane was more of a bowlers’ captain. “I don’t know,” Shastri said. “I am hearing it [‘bowlers’ captain’] for the first time. What is a bowling captain? There is no definition as such for that.

“But he [Rahane] is a very shrewd leader, he has a good understanding for the game. A good reader of the game. And I thought his calm composure out there in the middle helped the debutants [Shubman Gill and Mohammed Siraj] as well, helped the bowlers as well. There was a calming influence out there.

“In spite of losing Umesh [Yadav, who hobbled off with a calf injury in his fourth over in the second innings], he did a great job out there.”

The praise didn’t come at the exclusion of the regular captain, Kohli, who left the tour for the birth of his child but followed the action and kept tweeting encouragement at the end of each day’s play. “Both are good readers of the game,” Shastri said. “Virat is very passionate. Ajinkya, on the other hand, is very calm and composed. It is their character. Virat is more in your face whilst Ajinkya is prepared to sit back in a very calm and composed manner. But deep inside he knows what he wants.”

Ever since Rahane took over, he emphasised on not over-analysing the one bad hour that cost them the Test in Adelaide but focusing on repeating what they had done on the first two days of the Test, which was to bat as well as they could and then stifle Australia with their tight lines and lengths.

“We decided there is no point thinking about Adelaide,” Rahane told Sony Sports Network. “Just one bad hour and we lost the game but before that first two days were really good. We bowled well and batted well as well. But it was all about coming into the Test match with that intent, with that attitude on the field. Collective effort from each and every individual. That was the message from me and Ravi bhai. That’s what we decided.”