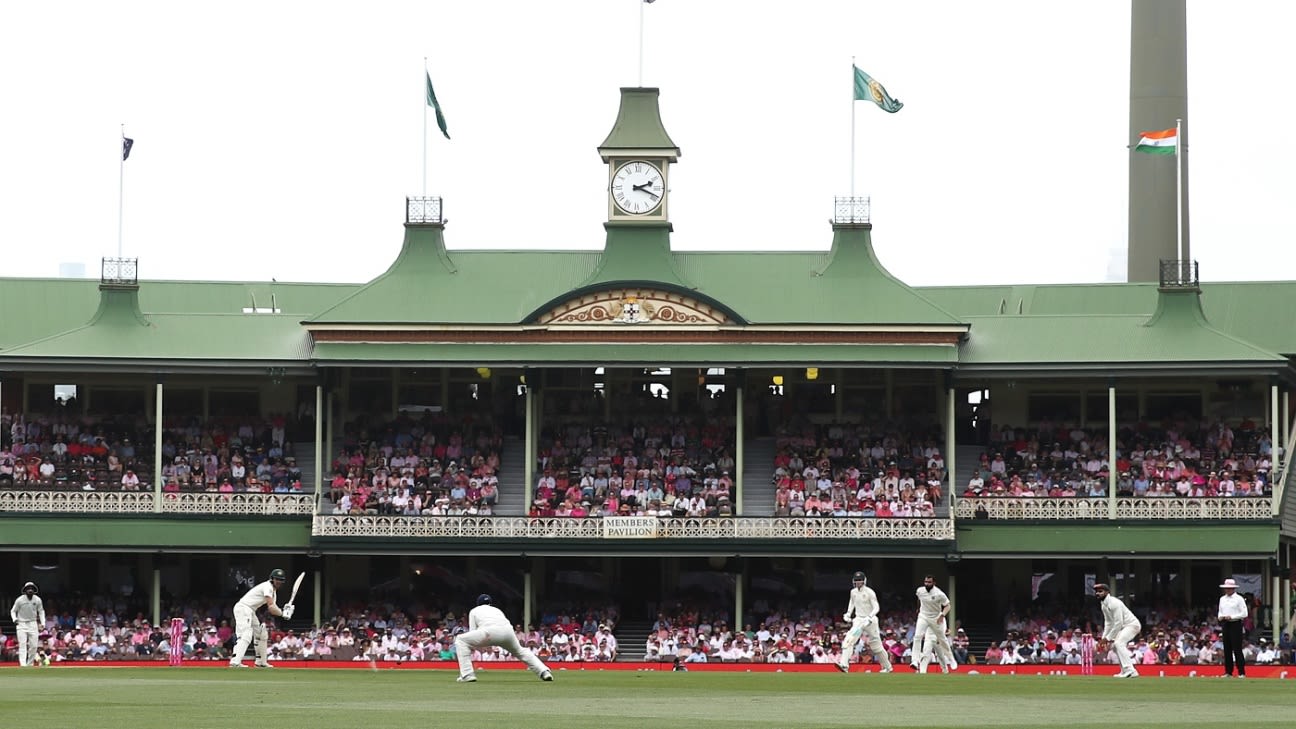 Nick Hockley, Cricket Australia’s interim chief executive, and New South Wales health officials have insisted the SCG Test will be able to go ahead and be followed by the travel of teams, officials and broadcasters to Queensland for the final Test at the Gabba even as the current Covid-19 outbreaks in Sydney continue to spread and place question marks over the possibility of crowds.

CA announced its decision to maintain the original schedule late on Tuesday, and Hockley spoke on Wednesday morning about two hours before New South Wales Health revealed 18 new cases had been detected in the previous 24 hours, an increase on recent days, and with a much wider spread of locations than previously.

The NSW chief health officer, Kerry Chant, stated that a 50% capacity crowd was still plausible so long as masks were worn. “We will be handing out masks on public transport going into the SCG, and advising people to wear masks when they are not physically at their seat,” she said.

“We’re looking at some of aspects of the mixing, but seated outdoor poses less risk than people perhaps gathering in households to look at the Test. We are looking over the plans as we speak to ensure that we can strengthen all elements.”

The NSW government also announced significant tightening of restrictions on activities allowed in greater Sydney for New Year’s Eve, but Hockley said that even in the event of case numbers rising further, the agreements cut with NSW, Queensland, the India team and broadcasters would be robust enough to ensure the series is completed as originally planned.

“That’s precisely the reason why we have our biosecurity protocols, why we have the measures in place while we’re in a bubble in Sydney and the arrangements we’re putting in place with the Queensland government,” he said. “Such that we can keep the playing cohort, the broadcast crew, all safe and then move safely into Brisbane so we can complete the full schedule while ensuring we’re being responsibly and keeping the community safe.

“That’s enabled us to minimise the cohort that would need to move from NSW to Queensland, which makes that more logistically feasible. Between all the broadcasters and the suppliers, we’re talking more in the vicinity of 20-30 people max, whereas earlier last week we were looking at 80-100.”

Hockley even suggested that CA was hopeful of accommodating more than 50% capacity at the SCG. “We want as many people as possible to be able to experience the new year’s Test but to do so safely,” he said. “Fifty percent is the baseline, but we’ll be working over coming days to see if we can get more.”

In describing the conditions the teams, officials and broadcasters will be working under, Hockley said that he felt a balance had been struck between the need for Queensland’s quarantine requirements to be met but also allowing for enough training and playing freedoms for both sides to perform. He also remained hopeful players with BBL clubs would be able to join that competition.

“Once the Test has finished it really depends on the conditions of the receiving jurisdiction. Players will be free to leave Queensland providing there are no restrictions to their onward destination. In terms of our playing group, they’ve obviously been within that secure bubble, there will be players then going on to the BBL and we’ll be working with relevant jurisdictions to make sure that we get the necessary exemptions if there are still restrictions in place.”

Australia’s vice-captain Pat Cummins said that the plans to go from Melbourne to Sydney to Brisbane would likely make life still tougher for members of the squad who have not seen family members for some months. Both teams will remain in Melbourne over New Year before traveling to Sydney on January 4.

“I think everyone’s prepared to do whatever it takes,” he said. “We’ve got the outlook that the relative freedoms we’ve had so far this summer have been a bonus. You look around the world, to get tournaments up and running there have been super strict, hard lockdowns so up to this point to be able to go outside and go for a coffee and whatever, we feel quite lucky.

“For sure some people are going to have it harder than others. I’m lucky I got a week or so at home during the one-dayers and T20s but we do have some guys who haven’t seen their partners for four or five months and now will be locked in a hotel room. So we’ll look after everyone as best as we can, but the priorities are getting through this series really safely and everyone’s absolutely desperate to play these last two Tests.”

For Cummins and the rest of both touring teams, daily life has become increasingly challenging in terms of finding activities that can be done safely while also giving players a break from wall-to-wall cricket.

“Everyone does it slightly differently,” he said. “Some people have their families here, some of the boys are flying solo at the moment, so I think there’s a few people off to golf today. We’re still in pretty strict conditions here so there aren’t too many options but we’ll get around each other. The BBL is on each night’s normally a meeting point for everyone to get in the team room and watch that. But we’ll certainly switch off from cricket for a little while, even just going for a walk and grabbing a bite to eat. But any ideas let us know, because we’re stuck a bit at the moment.”