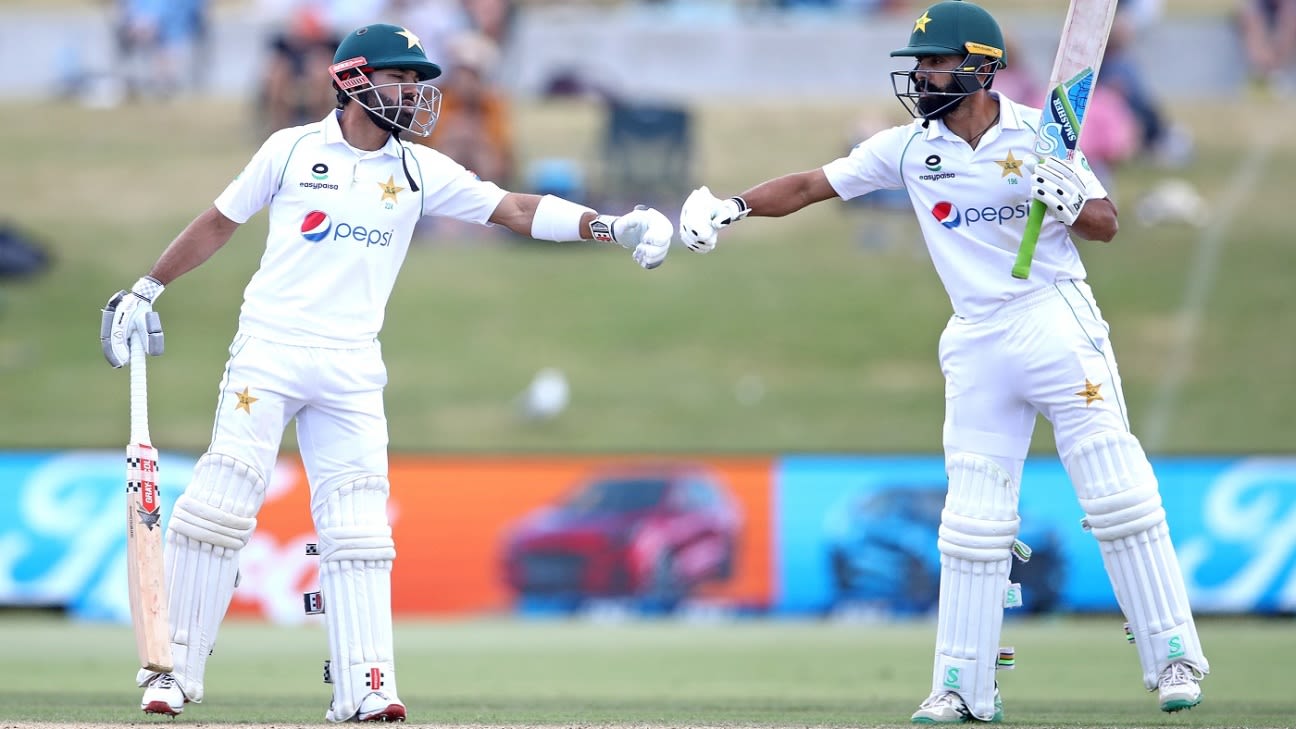 Mohammad Rizwan, who led Pakistan in the absence of Babar Azam in the Boxing Day Test against New Zealand, was happy with his team for “fighting well” on the final day, when they batted 85.3 overs after starting out with just seven wickets in hand, before going down at the fag end of the day. He did, however, point to the misfiring top-order batsmen as an area of concern, and called for “a little bit of improvement” there.

The final day’s play in Mount Maunganui started with Pakistan 71 for 3 in a chase of 373. That they lost by just 101 runs, after almost pulling off a draw, was chiefly down to the 380 balls Fawad Alam and Rizwan himself ate up during a 165-run partnership for the fifth wicket. It was the second-longest stand for Pakistan in Tests where ESPNcricinfo’s ball-by-ball data is available. Alam scored 102 in 269 balls, over 396 minutes, while Rizwan’s 60 came in 191 balls, scored in 285 minutes.

“I am not disappointed with the result, because the result is not in our hands, but the hard work is – I think we didn’t put in enough hard work as compared to them,” Rizwan noted after the game. “They played really well, so it’s fair that they won. But I will give full credit to my boys as well, we put on a great fight. Otherwise this game wouldn’t have gone that far. The end shows that both teams played really well, but they were ahead of us, and deserved to win.”

“Everyone saw that we fought well, and we are still in the series. I hope we will come back hard in Christchurch and square it”

Rizwan, like most others watching the game, had praise reserved for Neil Wagner, who bowled 28 overs with two fractured toes in the fourth innings and returned 2 for 55. But he stressed that Pakistan didn’t take their chances, and that made it tougher for them.

“You must give credit to their bowlers, the way they bowled throughout it was wonderful. Especially Wagner, with his injured toe,” Rizwan said of the quick who sent back Alam after the stand-in captain had fallen to Kyle Jamieson. “I told Williamson that he [Wagner] is mad. He bowled with a fractured toe and that is just different… New Zealand must be proud of him. His attitude, aggression and everything was beautiful. He is a big bowler.

“We had two difficult days and the decision to bowl first was taken so we could pick up some early wickets and gain some momentum. But we missed those half-chances from players like Kane Williamson and that helped them take the lead and later set a target for us. We wanted to chase and had the ability to chase but losing two openers yesterday and today losing Azhar [Ali] meant we had to try and save the game.”

The brightest spot in the Pakistan batting ranks was Alam, who scored his second Test century – the first one had come in July 2009 – and kept Pakistan’s hopes alive. The gap between centuries was 4218 days – only two others had a longer gap between Test centuries, Australia’s Warren Bardsley (5093 days) and India’s Mushtaq Ali (4544 days). Alam’s century was also the first by a Pakistan batsman in the fourth innings of a Test in New Zealand.

“Congratulations to Fawad bhai for his runs and the record,” Rizwan said. “He was focused and his concentration level was very good. We kept on talking about how to play, and the only simple plan we formed was to not worry about the runs and the scoreboard. And we didn’t panic. We agreed to play out 280-300 balls each, and then see. We did that, but Wagner, [Tim] Southee, Jamieson, [Trent] Boult never gave up, they kept on coming at us hard and turned it around.”

If Alam was a positive, the top three of Shan Masood, Abid Ali and Azhar was not. They put up 40 runs in the first innings, together, and while Azhar scored 38 in the second, Masood and Abid were out for ducks.

“We need a little bit of improvement in our top order and then we can perform well,” Rizwan said. “We have done well in the past and can do it again. Runs are due for a few and they will have to score. They have done it before, and I trust them to do it again. I know conditions are tough, but then all they have to do is see off the new ball, stay in, and make big scores.

“Importantly, everyone saw that we fought well, and we are still in the series. I hope we will come back hard in Christchurch and square it.”