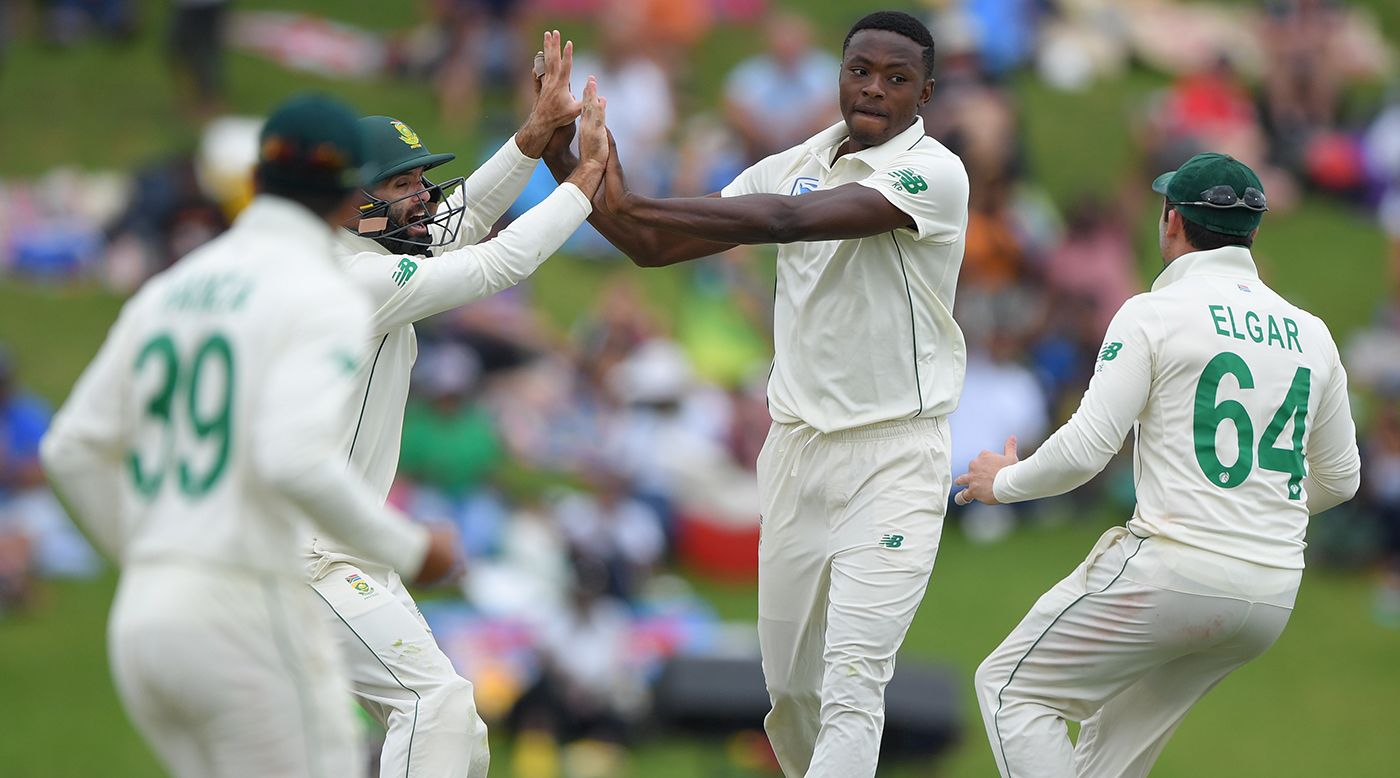 Kagiso Rabada is not an automatic pick for the Wanderers Test despite his status as leader of the attack and the match being on his home ground. Rabada was added to South Africa’s squad after four weeks on the sidelines with a groin strain, sustained during the T20 series against England.

He was due to sit out the three ODIs, which were postponed, and missed the Boxing Day Test but has joined the South Africa bio-bubble where the national coaches will work with him to determine his readiness for Test cricket.

“Because his name is Kagiso Rabada, we would want to play him but we’ve got to manage his loads,” Mark Boucher, South Africa’s coach, said. “He is coming back from injury so we will just monitor his progress.”

South Africa also hope to have Beuran Hendricks back in the squad after he was withdrawn last week, alongside Keegan Petersen. “Beuran is going through medical protocols to come into the bubble,” Boucher said. “He has needed to have one or two Covid tests as well as checking what his antibody tests are.”

Rabada and Hendricks will act as cover for Glenton Stuurman, who was tipped to make his debut at SuperSport Park but was left out with a niggle which is still being treated, and Lungi Ngidi, who had a small injury concern during the lead-up in Centurion. South Africa also have Migael Pretorius and Dwaine Pretorius in reserve. Petersen will not be added just yet, because all the batsmen in the current squad are fully fit.

“The guys we are looking to get in are only to cover for injury. We need cover especially for bowlers because we have had one or two niggles,” Boucher said. “A player has to be injured in order to be replaced. If there is no injury to a batter then no batter can come into the bubble.”

South Africa have Kyle Verreynne, Raynard van Tonder and Sarel Erwee in addition to the top six that played at SuperSport Park, which is likely to be unchanged for the Wanderers. “We just got 600, why would I want to change our batting order?” Boucher said. “In Test cricket, you wait for your opportunity to come. We’ve got a couple of very good batters waiting in the wings and we will keep working with them so they are ready if their opportunity comes. For now, it will be very difficult for me to swap a batting order that has been through a couple of tough times of late, and played well. I’ll take the 600 and keep working on that. We’ve got tough Test series coming up against Pakistan and Aus. It’s no time to start experimenting.”

The same does not apply to the frontline bowlers, who Boucher recognises need to be rotated to protect them from injury and ensure the quicks have enough time to get their workloads up.

“Sometimes with bowlers you just want to play a guy for the sake of playing him because he is your top bowler and you need to consider his workloads, from a mental side, from a physical side. You’ve got to take the emotion out of it and make a smart cricketing decision,” Boucher said. “Say for a guy like KG, we want to play him all the time, but he has got to get his workloads up [or] there is a high risk of him getting injured. Then we would be doing an injustice, not just to himself but to ourselves.”

Rabada has not played a Test since January, against England in Port Elizabeth, and has not played any first-class cricket this summer. The lack of red-ball game time combined with the long period of inaction because of the Coronavirus lockdown could leave him more susceptible to injury if he goes into a Test underprepared. That much was evident in the opposition camp, where Sri Lanka lost two quicks in the Test, something that could be put down to their increased load in a short space of time.

Boucher had some sympathy for his opposite number. “It’s very difficult in these times to prepare,” he said. “We haven’t had a lot of cricket – games have been postponed or cancelled. We are having to think out of the box continuously to try and get our workloads up in order to bowl 20 overs a day.

“It’s easier for batters to work on their fitness. You can do shuttles. But, it’s difficult to bowl 20 overs in your back garden. You have to try to simulate a game situation. You might have to bowl 10 overs in the morning and then come back in the afternoon and bowl another 10 overs, and while you are busy waiting you walk around the field, and that is trying to simulate what you would do in a game. You can’t put guys in cotton wool and just have them bowl six overs and think they are ready for a Test match. You can’t just say to a guy rock up and bowl 20 overs now. You’ve got to build him up so if you do want to push him, his body can handle it.”

All of South Africa’s attack were put through their paces in Centurion. Anrich Nortje, who had not played any red-ball cricket since January, bowled the most number of overs with 22, Wiaan Mulder, in his second Test, sent down 20 overs, while Ngidi and Sipamla bowled 19 and 16 respectively. If fit, all will be in contention at the Wanderers, as will Keshav Maharaj after Boucher indicated South Africa would not go all-pace.

“I am not a big fan of going into a Test match without a spinner. It’s very dangerous,” Boucher said. “As we saw with Sri Lanka in this game, if they didn’t have a spinner, they would have struggled even more. I doubt we will go in without Keshav.”

The Hundred to be played in four-week window in August 2023
Curran, Stokes, Williamson list highest base price at IPL auction
Australia’s Test return to Perth likely to prove a tough sell
‘We bowled well but luck didn’t go our way’ – Phil Simmons
Labuschagne: Nice to score runs when not absolutely feeling 100%