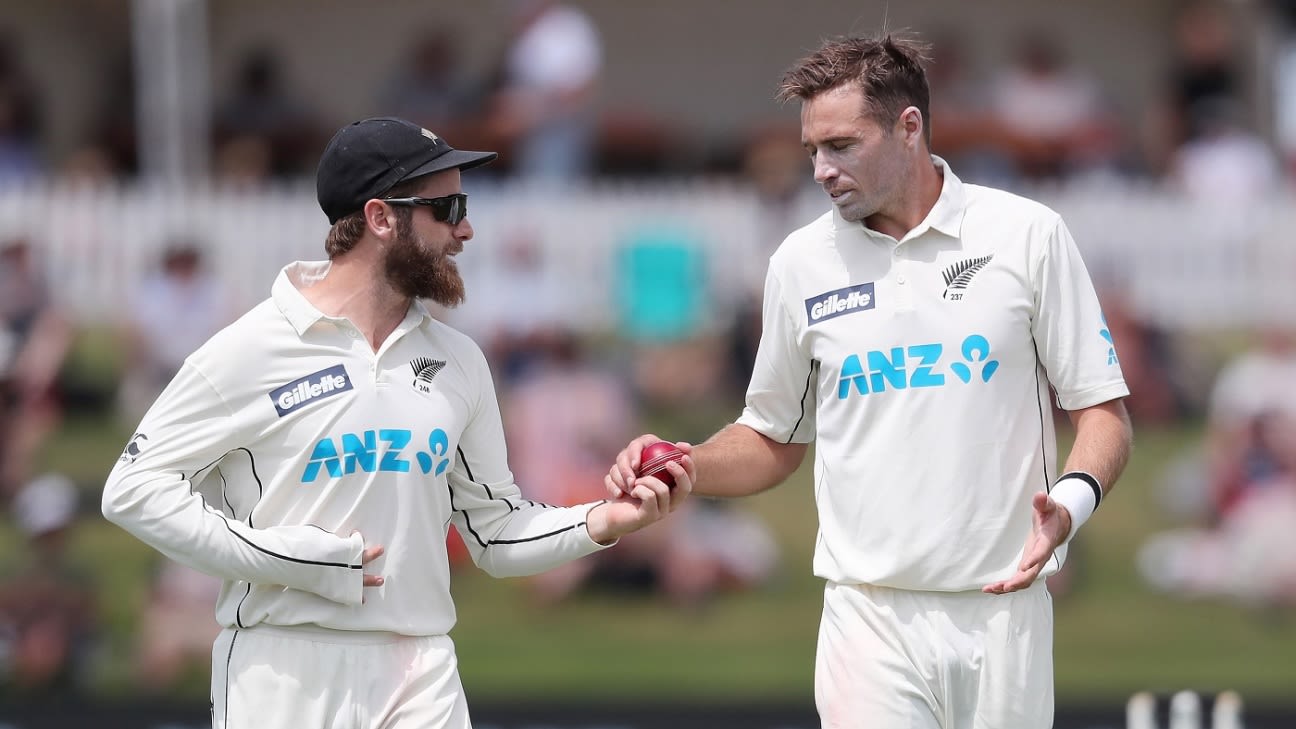 New Zealand quick becomes third from his country, after Hadlee and Vettori, to pick up 300 Test wickets

Tim Southee has become only the third from New Zealand, after Richard Hadlee and Daniel Vettori, to get to the 300-wicket milestone, which he achieved with Haris Sohail’s scalp in Mount Maunganui on Tuesday. “It’s a pretty cool feeling,” Southee said afterwards, and promised to try and keep adding to the number as long as he is able to keep up with the demands.

“It’s special, and obviously not many people have been able to do it and the two that have, they are two of our greatest-ever cricketers – so it’s nice to be in that bracket with those guys,” Southee said. “When I was a kid, all I wanted to do was play cricket for New Zealand and I guess to sit here after a reasonable time of doing that and achieving a couple of things along the way… it’s a pretty cool feeling.”

“It’s there in the background,” he added when asked if the record was on his mind. “But when you’re out there, you’re all for the side. But you obviously know, you’re reasonably close. So, yeah, the guys keep reminding us. Wags [Neil Wagner] was actually one ahead of everyone else, he thought it was the first one and came in and gave me a big hug, and I was thinking ‘what’s going on here mate?'”

“One thing that’s never changed is, I guess, the drive and the determination to keep getting better and keep learning. Just because you’ve played a number of Test matches doesn’t mean you can’t continue to learn”

Milestones for bowlers don’t always come with magic deliveries, an outswinger catching the outside edge as it nips away, for example. For Southee, Sohail was dismissed driving to short cover, a wicket-ball only because the batsman’s front foot didn’t go where it was meant to.

“I’d love one to pitch on off and nip away and get caught behind,” Southee said. “But the surface obviously dictates what you’re trying to achieve. And the wicket is obviously a bit slower, so those catches in front of the wicket become very important.”

Southee is just past his 32nd birthday. To go on, he has James Anderson to look at for motivation. “I’d love to play for as long as I possibly can,” he said. “I love doing what I’ve done and fortunate enough to do it for a period of time now. Obviously there’s high standards that come with representing New Zealand. And as long as you can, I guess, withhold those standards, then I guess age is any number.

“I just turned 32 the other day. So I think people think I’m probably a little bit older than I am. But it’s something I love doing. You look at the likes of James Anderson, still able to achieve what he’s achieving at the age of 38, Ross [Taylor] as well, the way he seems to be getting better and better with age as well. So it’s it’s just a number. So long as you can maintain those standards that are required at this level, then, you know, I’d like to continue to play.

“One thing that’s never changed is, I guess, the drive and the determination to keep getting better and keep learning. Just because you’ve played a number of Test matches doesn’t mean you can’t continue to learn. That’s something that’s been there from day one, to learn from others in the side and others that you play against.”