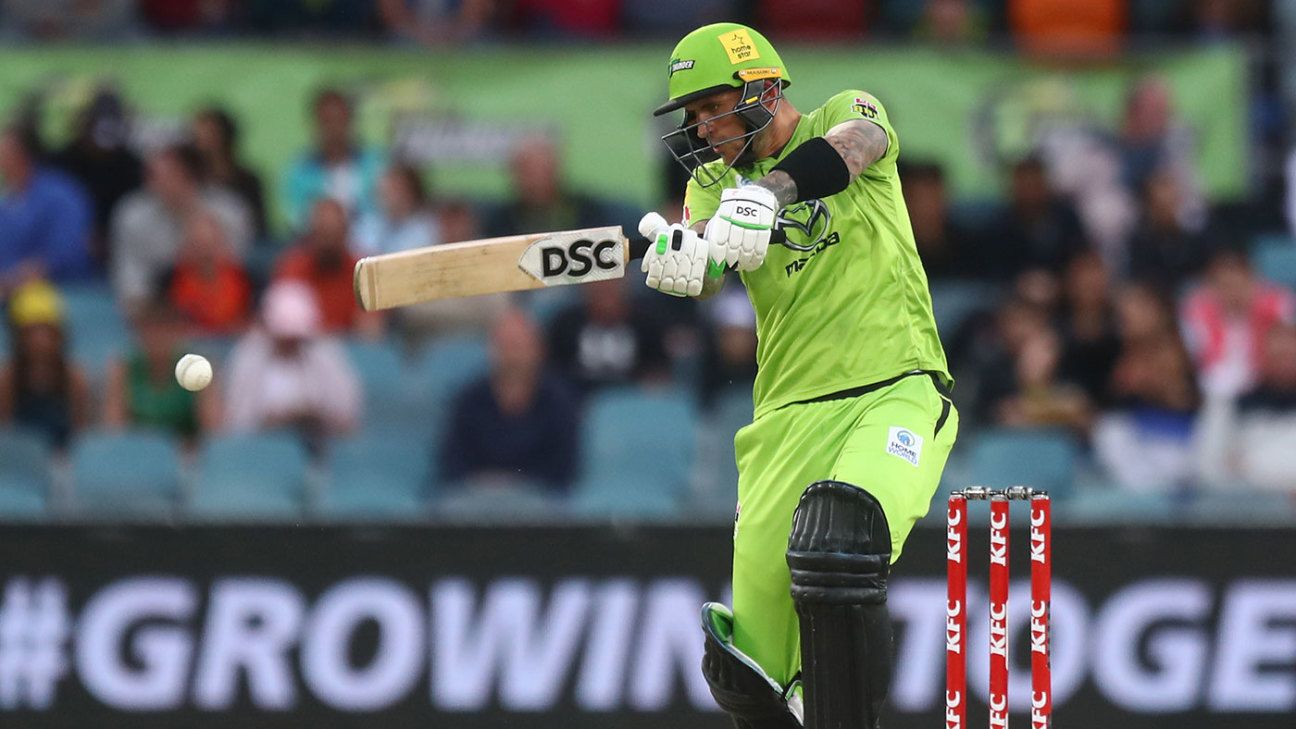 Man of the Match Alex Hales sprinted to the fastest fifty in Sydney Thunder franchise history, setting up a franchise record total of 219, before the spin duo of Chris Green and Tanveer Sangha put the brakes on a dismal Melbourne Stars chase in a 75-run trouncing at Manuka Oval in Canberra.

Hales slog-swept his way to five sixes and eight fours in his 71 off 29 balls, dominating an 89-run opening stand with Usman Khawaja, before Callum Ferguson picked up where Hales left off to craft his own half-century in the Thunder’s imposing total.

Needing 11 an over to overhaul the target, Stars kept pace for the first three overs, but started to unravel with the introduction of Green’s spin in the fourth over. A 16-ball sequence of 2 for 6 ensued as Green snatched the opening combo of Marcus Stoinis and Andre Fletcher, and the Stars never seriously threatened thereafter in a lopsided performance.

Raise the roof
The Thunder bowling unit found it hard to contain Hales on the night, especially against spinners. His first six came against Glenn Maxwell to start the third over, charging the Stars captain and depositing him over long-on. He swept along the ground for a boundary through square leg off Afghanistan left-armer Zahir Khan in the fifth.

He ramped it up against Adam Zampa in the sixth, slog sweeping him over midwicket to barely clear the rope on the second ball of the over. He left no doubt three balls later though, middling another slog sweep over the roof of the stands to bring up 50 off 21 balls. Hales began the eighth over cracking another slog sweep way over the roof in the midwicket stands against Nic Maddinson’s left-arm spin before eventually perishing next ball trying to repeat the feat. By that stage though, Thunder’s platform of scoring at better than 10 an over had been established and they never dropped below that rate for the remainder of the innings.

Ferguson’s fine form continues
Thunder captain Ferguson was a model of efficiency after taking over from Hales. Including the ball that claimed his wicket, Ferguson only chewed up five dot balls in his 33-ball innings, rotating the strike with ease and seizing upon loose deliveries to pick up boundaries to maintain the pressure on the Stars bowling unit.

His first boundary was a slog swept six off Maxwell in the 10th. He was fortunate to survive a dropped chance on 25 at deep midwicket off the bowling of Zahir when another slog sweep burst through Ben Dunk’s hands to the midwicket rope. But two balls later he swept safely along the ground to pick up another boundary. The only boundary through the offside came when he cracked a half-tracker from Zampa through mid-off to bring up his half-century before perishing one ball later. However, a six from Green two balls later took Thunder’s past 200, well beyond the reach of anything the Stars were able to conjure.

Green and Sangha stymie Stars superstar bats
On paper, the Stars may have arguably the most explosive batting lineup in the competition, especially with Marcus Stoinis coming back into the XI after missing the previous one-wicket defeat at the hands of the Sydney Sixers. But after racing out in the opening three overs against the Thunder’s pace attack of Adam Milne, Daniel Sams and Chris Tremain, their big hitters crumbled when pace was taken off the ball.

Green entered in the fourth and was struck by Stoinis for consecutive fours back down the ground. But the offspinner cleverly adjusted his lines to cramp Stoinis’ attempts to drive him through the off side. After two dots, a forced attempt to clear extra cover found Sams on the ring to dismiss Stoinis for 27. After Sangha conceded just three singles in the fifth to choke the run rate further, Fletcher struggled to free his arms trying to clear midwicket against Green in the sixth, and was caught easily by Milne at deep midwicket. Sangha then bowled a sterling one-run over in the eighth, claiming Hilton Cartwright stumped after a hopeless charge.

The only three boundaries struck by Maxwell and Nicholas Pooran off the next six overs came off of the medium pace of Sams as they continued to be flummoxed before perishing. Ben Dunk attempted a counterattack in the 15th, slog sweeping Green for a hat-trick of sixes over the leg side to spoil his figures, but Green cleverly dragged his line wider outside off when Dunk attempted a fourth heave and it resulted in a skied catch to long-off. A rare bad ball by Sangha still wound up as a wicket when Liam Hatcher pulled a half tracker to Green at deep midwicket for the eighth dismissal. Chris Tremain finished off the tail in the 20th to officially cement victory.