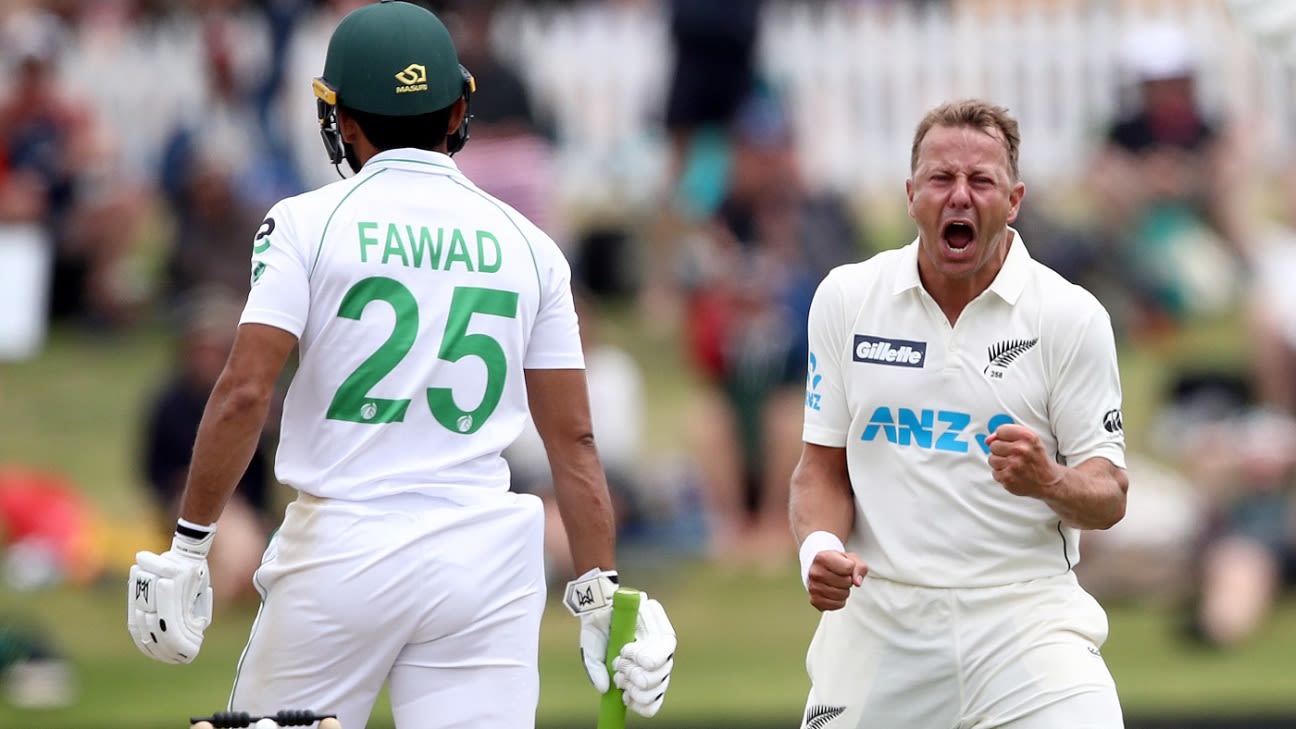 Neil Wagner was carrying the pain of a fractured toe, sustained while batting in the first innings of the first Test against Pakistan, but he persevered through that injury and bowled 21 overs in Pakistan’s first innings because it would have ‘taken a stretcher’ to carry him off the field where he would be sitting and watching his team-mates do the hard work.

Wagner was struck on his right foot by a Shaheen Afridi yorker on the second morning, but was later cleared to play if he could tolerate the pain.

“I do take a lot of pride in something like that,” Wagner said about bowling through the pain. “But it comes down to the team. There’s still a way of contributing for them. I wouldn’t be wanting to sit on the side with my foot up and watching the boys doing the hard work out there, and I can’t be there to help out. I feel I’ll be left out, I have a bit of FOMO. Injuries happen and it’s unlucky, but I can still walk, I can still do things, I can run. It’s not going to stop me. It’s sore and it’s uncomfortable but it’s just one of those things you have to deal with.

“Test matches don’t come easy. Playing for your country is never anything you can take for granted. I know how bloody hard I had to work to get to where I am now and I’m sure as hell not going to sit on the side and watch other people do it. I want to be part of it and playing my part. Unless they carry me off on a stretcher, I’m going to try and do everything I can, I guess.”

Wagner had continued to bat after being struck on the toe, getting treatment from the physio and eventually being the last man out for 19, to stretch New Zealand’s first-innings total to 431. Wagner then sent down 21 overs – three on the second day and 18 on the third – picking up 2 for 50 to bowl Pakistan out for 239. Wagner’s effort included a long spell of nine overs, during which he dismissed Fawad Alam before going off the field.

Play on the third day was interrupted by several rain breaks, and taking a pain-killing injection in the first one helped Wagner soldier through till the end.

“Hurts every time I walk, to be fair,” he said, responding to whether the pain was more acute while bowling. “Just walking to fine leg, doing anything, twisting, turning…as soon as you bend the toe a little bit. I guess obviously standing on it hurts. It’s just one of those things, I guess. Try and put it out of your mind and get on with it. Try to get into the battle and try not to think about it too much. Obviously that’s hard because it’s at the back of your mind the whole time. At the start it sort of felt like – not having to change my action but it felt a little bit awkward towards it. It wasn’t until the first rain break where I just went down and said I can’t bear the pain, got a jab done and that sort of took the pain away for a lot of it and it helped. It’s one of those things, you’ve just got to find a way and deal with it.”

To focus his mind more on the task at hand than on the pain, Wagner said he didn’t keep track of the number of overs he had bowled either, and expressed confidence in being able to bowl again in the second innings.

“I know how bloody hard I had to work to get to where I am now and I’m sure as hell not going to sit on the side and watch other people do it.”

“I’ve bowled – I don’t even know how many overs – didn’t want to count them and think too much about it,” he said. “So I’m pretty confident I can bowl again. It’s going to be damn sore, no doubt about it, but bowling is always… I’ve never bowled in a game where something doesn’t hurt, so it’s sort of part of it. It’s a different pain but I’ve just got to find a way of still being able to contribute to the team. There’s still a role to play out there and we still have to come back to get ten wickets again and try and win a Test match. So whichever way I can play a role, still going to have to try and do it.”

Wagner called the third day one of the toughest he had experienced, harking back to a Test match against India in October 2016 for a comparable experience.

“I went back in the change-room and said it was probably one of my toughest days of Test cricket I’ve ever experienced. Took me back to Kolkata against India, probably one of the toughest matches I’ve played. It was pretty hot and dealing with the heat, humidity and going off and changing your clothes after every four-over spell… I went through four sets and was just completely knackered off the exhaustion of the Indian heat. Today was right up there. It was pretty tough.

The possibility of Wagner being available to bowl in the fourth innings will be a boost to New Zealand. Pakistan had collapsed to 80 for 6, and seemed in danger of falling well short of the follow-on mark, but fighting half-centuries from Mohammad Rizwan (71) and Faheem Ashram (91) meant they avoided that fate. New Zealand still have a handsome lead of 192, and are likely to press for quick second-innings runs and a declaration when they start batting again on the fourth day.

Wagner praised Pakistan’s grit, but also lauded his team-mates for not letting the intensity drop.

“The wicket’s deteriorating at the moment and we knew we had a big task to try and bowl them out today. I think today was the best time to bat, but also it was tough in periods because there was a bit of variable bounce and the ball went up and down a fraction,” he said. “Those cracks are starting to come into play a little bit more now, as the game goes on. But they batted really well. They’ve played well this whole Test match. They bowled really well which gave us nothing, and obviously took a lot of time out of the game. The way they batted – I thought we bowled really well and put them under pressure but they still managed to get a really good partnership. We kept throwing everything at them and they kept counter-attacking against us. But credit to all the guys, everybody kept running in and bowling for each other, working really hard. We bowled as a pack and knew rewards would come our way.”

The second and final Test of the series starts on January 3, and it’s one Wagner does not intend to miss if he can help it.

“Don’t want to look too far ahead, but you’re going to have to try and force me away,” he laughed. “We’ll sum it up after each day and hopefully it gets better. Hopefully we can do the job and get a couple of days rest for the foot, but we’ll see how it goes.”

Rehan Ahmed set for white-ball debut as England name squads for Bangladesh tour
Life in the bubble with the Aussie men’s team
Hathurusingha returns as Bangladesh men’s team head coach
‘This was a shocker of a wicket’ – Hardik Pandya critical of Lucknow pitch
WPL player auction likely to take place on February 11 or 13, Mumbai could host first edition