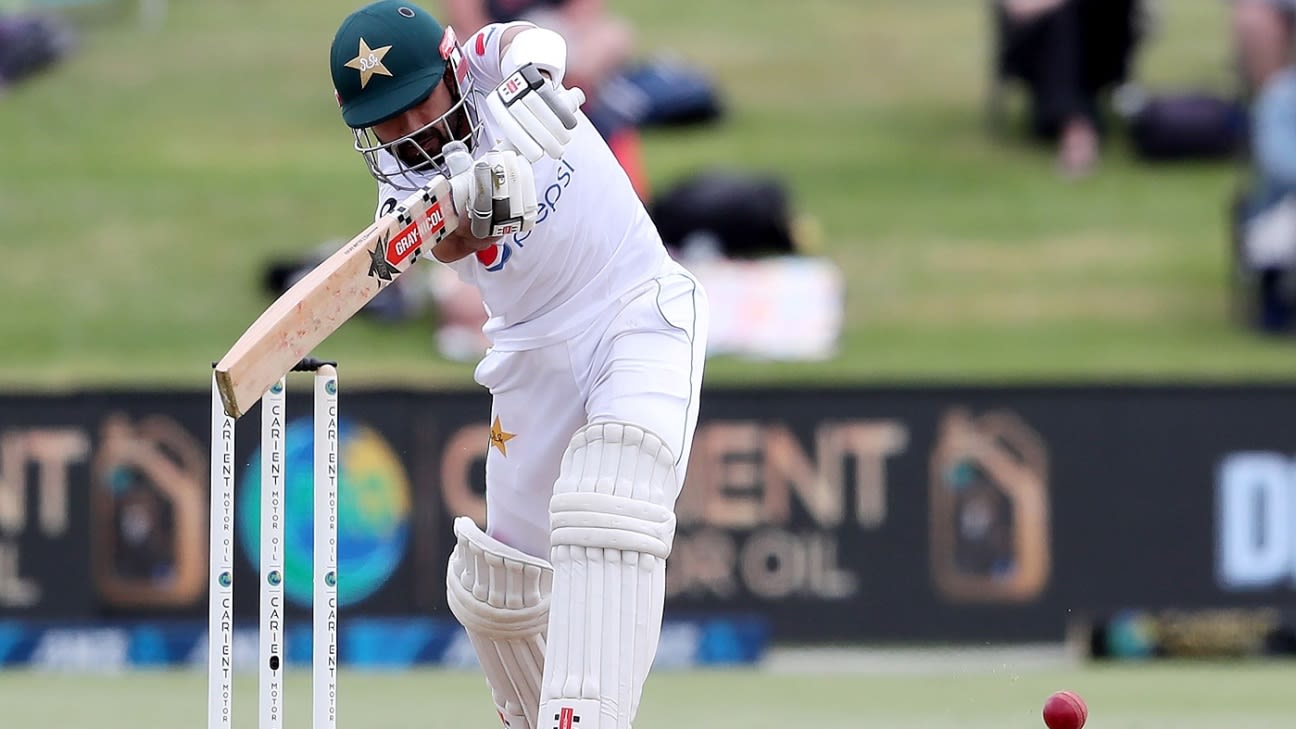 On a poor day for the Pakistan batsmen across in Mount Maunganui, the two bright spots were Mohammad Rizwan and Faheem Ashraf, who hit 71 and 91 respectively, and added 107 for the seventh wicket, to help their team just about avoid following on. Batting coach Younis Khan was understandably unhappy, and pointed to the batsmen not sticking to a “simple plan” to build partnerships, and asked them to learn from Kane Williamson, the opposition captain.

“It was a simple plan to take time and shift to the next gear accordingly, but we lost back-to-back wickets and didn’t get the momentum we wanted,” Khan said after the third day’s play, which ended with New Zealand 192 ahead after the first-innings exchanges. “In the end, we had that partnership around 100-plus runs, but then a good piece of fielding from New Zealand broke the momentum [Rizwan was dismissed] and we were back where we started.

“I think as a young unit we have to learn that it’s all about partnerships. You sometimes learn from the opposition as well, the way New Zealand picked up after losing two wickets on day one and how the captain took the responsibility and anchored two to three partnerships. That is where we lost it.”

After New Zealand had scored 431, Pakistan quickly slipped to 80 for 6. The 100 for the innings came off 394 balls – the seventh-slowest anywhere since 2002 for matches ESPNcricinfo has ball-by-ball data for. Rizwan and Ashraf lifted the team after that but New Zealand still hold the upper hand.

“At the moment, it looks like we are little bit on our back foot, but on the last day the situation will dictate what our plan will be (save the game or go for a win),” Khan said. “The pitch is a little bit slow, so if they want to win this Test, they have to take some brave decisions. Williamson isn’t a new captain. He has a lot of experience and has an experienced team, so we are expecting an early declaration (on the fourth day) and we are ready for that. I hope some of our top order can score some runs and gain the form for the next Test match.”

For the ongoing game, however, Pakistan have Rizwan and Ashraf to thank for keeping them in the hunt.

Rizwan, who is leading Pakistan in Babar Azam’s absence, reminded him of himself, Khan said, especially when it came to the 28-year-old overcoming early-career struggles to bounce back: “When I see him, I see him, like me, struggling first and then regathering myself to find my game. It isn’t just about this Test match… even in the T20 series, when he was struggling in the first two games, it was like me struggling, and then I get to know my game and have to change a little accordingly.

“So my advice was very simple for him to play his natural game. You just go and spend some time at the pitch and things will suddenly start coming to you. He did in the third T20 and he has taken his form into the Test series. He knows his role, his strengths and weaknesses. He is a captain as well and with the runs he is leading from the front.”

As for Ashraf, he continued to give Pakistan hope of having a genuine fast-bowling allrounder, his 91 in over three hours coming after he returned 1 for 40 in 19 overs. He made his Test debut in May 2018, but was dropped after four Tests when then head coach Mickey Arthur expressed his doubts about Ashraf’s role – “we tried to develop Ashraf although his batting hasn’t gone to the level in should be”. He has made a comeback now, and a strong one it has been too.

“We need player like Faheem Ashraf, because it’s not possible to play in the subcontinent all the time,” Khan said. “It’s not just me, but other coaches, especially Waqar Younis, who was very keen to give him more chances in Test cricket. He offers us something we have been missing since Abdul Razzaq and Azhar Mahmood (retired). Batting is all about patience and he is improving with every passing day, and he has all the potential in him to become the allrounder we need.”