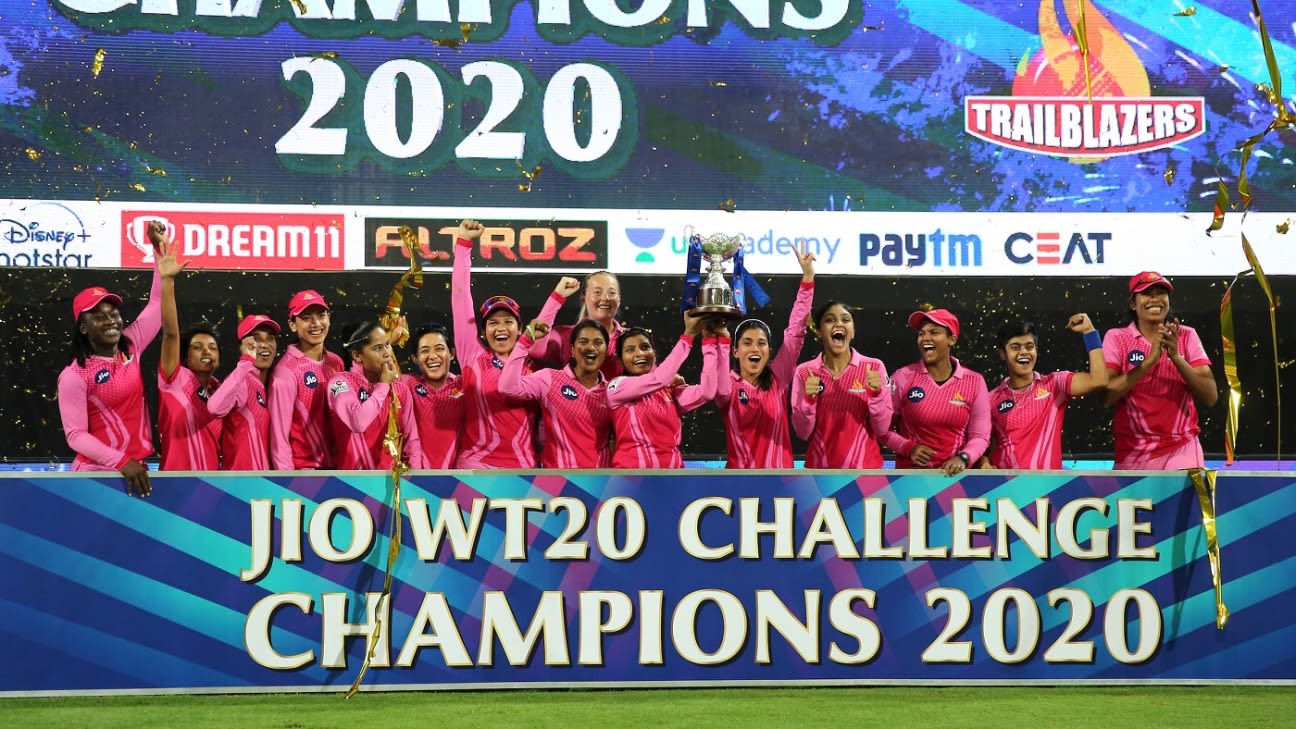 The 2020 edition of the Women’s T20 Challenge logged 5.34 billion minutes in viewership in India. That’s a 2.45-times rise from the 2.20 billion minutes the 2019 edition recorded, with as many as 105 million unique viewers tuning into the three-team competition as opposed to last season’s 71 million viewers.

Broadcast data obtained by ESPNcricinfo from Broadcast Audience Research Council India and Star, the media-rights holders of the BCCI, revealed that this year’s tournament, played alongside the playoffs of the IPL in the UAE, recorded a 147% increase in viewing minutes and 47% rise in unique viewers in India from 2019. The three-team tournament, held from November 4 to 9, was aired across 11 Star Sports channels as opposed to eight last year.

“The record-breaking viewership for the Women’s T20 challenge is a testament to the love for women’s cricket in India,” Sanjog Gupta, Head of Sports at Star India, said. “At Star India, we amplified the reach and engagement through a mega cast in five language-feeds [Hindi, English, Tamil, Telugu, Kannada] across 11 channels, giving it an unprecedented reach, similar to that of IPL.”

In November, the BCCI had labelled the tournament “financially independent”, the 2020 edition having earned a title sponsor and multiple official sponsors. As such, the plan was to make it a four-team event this year, but it was played with three because of – although never officially explained – the uncertainty around the Covid-19 situation and the clash in scheduling with the Women’s Big Bash League.

“I am delighted with the way the tournament has been received by TV-watching people in India in such a challenging year,” Jhulan Goswami, the veteran India pacer and member of this year’s winning team, Trailblazers, told ESPNcricinfo.

“Women’s cricket, especially Indian women’s cricket, has been dealt a severe blow by the pandemic, and nothing seems to be on the horizon to get the ball rolling. This news [of the numbers] could help motivate not just those of us (who participated in the tournament) but also young girls in India dreaming to be professional cricketers despite seemingly insurmountable odds.”

“These numbers prove that if the average cricket-watcher in India is given the opportunity to see Indian women cricketers play, it’s likely they will turn the TV on and watch us play” – Jhulan Goswami

Goswami, who has been part of all three editions of the WT20C, said the increase in viewership made a “case for giving every chance to increase the visibility” of India’s “established and up-and-coming female cricketers”, whose performances in recent world tournaments “have expanded the team’s and their own fanbase.”

“The shift in the Indian public’s perception of the women cricketers began in the 2017 [ODI] World Cup [where India finished runners-up],” Goswami, who on Sunday was named in the ICC’s Women’s ODI Team of the Decade, said. “Since then, our T20I team played a World Cup semi-final [in 2018] and this year, in Australia, the final for the first time. That World Cup also had a massive following. Why? Because we beat strong opponents like Australia, New Zealand on our road to the final, we played fearless cricket.”

An ICC release from earlier in the year vindicated Goswami’s argument.

“India’s success in making it to the final,” read the statement issued in June, “boosted audience interest” in the 2020 T20 World Cup, making it the “most watched ICC women’s T20 event in history”. “India live viewing hours were 86.15m which is 152% higher than the 2018 tournament, driven by India’s success and the broadcast of select India matches by Star Sports…,” the statement read.

But what does all this mean in real terms? Could the spike in numbers have a direct bearing on the marketability of women’s cricket in the country?

“To have that kind of a jump [in viewership], a two-and-a-half-times increase in a single year, is significant, extremely significant,” brand specialist Santosh Desai explained. “Even if it was from a relative-response base, [it] doesn’t matter… It’s an encouraging sign because it could lead to an influx of money and more sponsor interest which can catapult the game to higher levels. We are potentially at a point of inflection here. If it sustains and continues over next year, we could see it become a significant part of the annual calendar [in the near future].

“How spectacle-worthy a sport is becomes an important determinant of viewership. Tuning into women’s sport is the first barrier in India because of prevailing stereotypes. But several factors, including the pandemic, the Indian team’s performance in recent years, improved skill-sets, individual distinction and style of some players – could have accelerated that process.”

Goswami, meanwhile, hoped that the sustained growth in viewership of the WT20C, considered a precursor to an IPL-style league in India for women, could lead to better investment at the foundational rung of the women’s game in the country.

“These numbers prove that if the average cricket-watcher in India is given the opportunity to see Indian women cricketers play, it’s likely they will turn the TV on and watch us play,” she said. “The Indian team’s players had not played any cricket since the T20 World Cup in March, and then came the T20 Challenge [about eight months later], so when people got a chance to watch us again, they did. Hope it translates in to more investment at the grassroots.”

ESPNcricinfo and Star are part of the Walt Disney Company