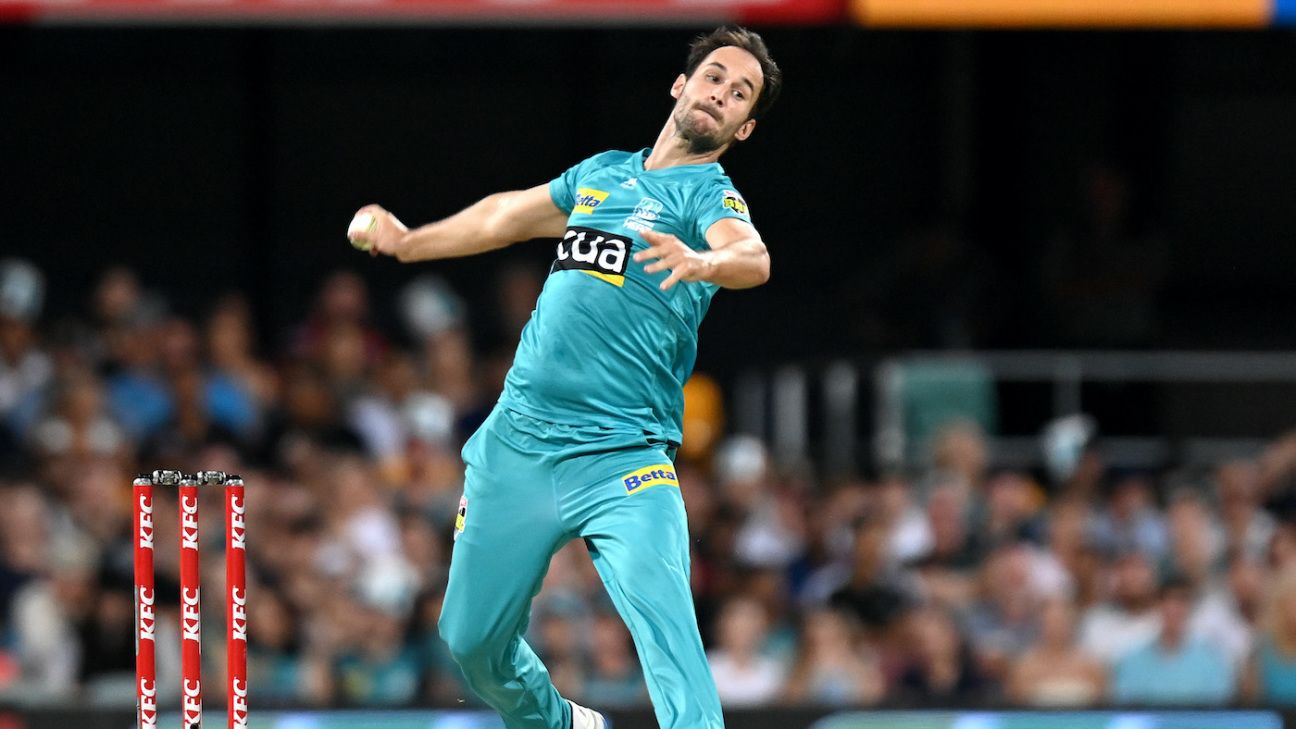 While Gregory destroyed a vaunted top order, Bazley held his nerve to steer the team home after a collapse

The fresh faces of Lewis Gregory and James Bazley helped the Brisbane Heat break through some nervous scar tissue and claim their first win over the season against the Hobart Hurricanes at the Gabba.

Gregory, in his first game out of quarantine after England’s tour of South Africa, claimed 3 for 22, dismantling the Hurricanes high-profile top-order, to help ensure the Heat were only chasing 149 to win.

Sam Heazlett and Max Bryant blasted six sixes and four fours between them in a blistering 73-run stand to set the chase up before a trademark Heat meltdown had them staring down another humiliating defeat at 6 for 102. But despite D’Arcy Short‘s brilliant spell of 3 for 18 and Riley Meredith taking two wickets in an over, Bazley showed no nerves on BBL debut, smashing 31 not out off 19 balls to guide his side home alongside skipper Jimmy Peirson.

The Hurricanes loss was compounded with James Faulkner suffering a hamstring injury while bowling in the third over of the run chase.

Malan changes the mix
The Hurricanes had started the season with three wins in four games without Matthew Wade or Dawid Malan. The arrival of the world’s No.1 ranked T20I batsman suddenly gave the Hurricanes an embarrassment of riches at the top of the order. Ben McDermott, who starred against the Renegades, opened for the first time in his T20 career but it didn’t go as smoothly as planned. He was dropped once before holing out to mid off for 16 off 14. Short started nicely though, striking four crisp boundaries and Malan looked as though 14-days of hotel quarantine had not affected the form he was carrying from South Africa. The Hurricanes were cruising at 1 for 52 after seven overs having hardly taken a risk.

Good times for Gregory
Gregory nearly didn’t play for the Heat with concerns about his lack of bowling and conditioning during 14-days of quarantine in a hotel room. But he showed why he was such a prized signing with an outstanding three-over spell to see the Hurricanes slump to 4 for 77 after 12 overs. His mix of slower balls and on-speed deliveries with a similar action deceived the Hurricanes top order. Short and Malan both fell in the same fashion, miscuing short balls that hurried them. Handscomb was undone by a slower ball, picking out mid-off. Gregory took 3 for 11 in his first three overs. The Hurricanes then struggled at the back end of the innings. Colin Ingram and Tim David could not take advantage of the Power Surge with Mark Steketee and Mujeeb Ur Rahman bowling superbly. Jack Wildermuth also produced an excellent spell, including an outstanding penultimate over. Faulkner made 26 not out off 18 to lift the total to 7 for 148, but had the Heat not dropped two simple chances in the last three overs they may have been chasing less than 140.

Bryant and Heazlett finally fire
Much has been expected from the dynamic young duo but they have had a poor tournament to-date. However, against one of the best fast bowling brigades in the BBL, they lit up the Gabba with a belligerent display of hitting. Bryant treated Faulkner and Scott Boland with disdain, thumping them down the ground. Heazlett then followed suit with two huge sixes over the leg side off Faulkner before he limped off four balls into his second over with a hamstring injury. They took 46 from the Powerplay without loss. Handscomb turned to teenage legspinner Wil Parker and his first over in BBL cricket went for 21 as the left-handed Heazlett deposited him into the midwicket crowd three balls in a row. The Heat were 0 for 67 after five overs needing less than a run-a-ball with 10 wickets in hand.

Bazley the brave
Despite the amazing start, the Heat produced a trademark collapse that had the potential to cost them the game. Bryant casually flicked Nathan Ellis straight to a fielder which opened the door ajar and Short waltzed on through taking 3 for 18. He bamboozled Dan Lawrence before Heazlett needlessly lofted one straight to long off. Tom Cooper survived an lbw shout off Ellis, when ball-tracking had it crashing into middle and leg. But he wasn’t so fortunate facing Short. He thumped a drive flat back at the umpire and Short miraculously plucked it in his left hand to claim a stunning caught and bowled. Handscomb then called on Riley Meredith who took two wickets in three balls to leave the Heat 6 for 102 needing 44 to win with just two specialist batsmen remaining. Bazley held his nerve on debut alongside his skipper. The 25-year-old bravely launched Short over long on to relieve some pressure. He held out against the pace of Meredith before slashing him behind square and pulling him into the stands. Ellis missed his length with a slower ball and Bazley clubbed it over deep midwicket to ice the game.