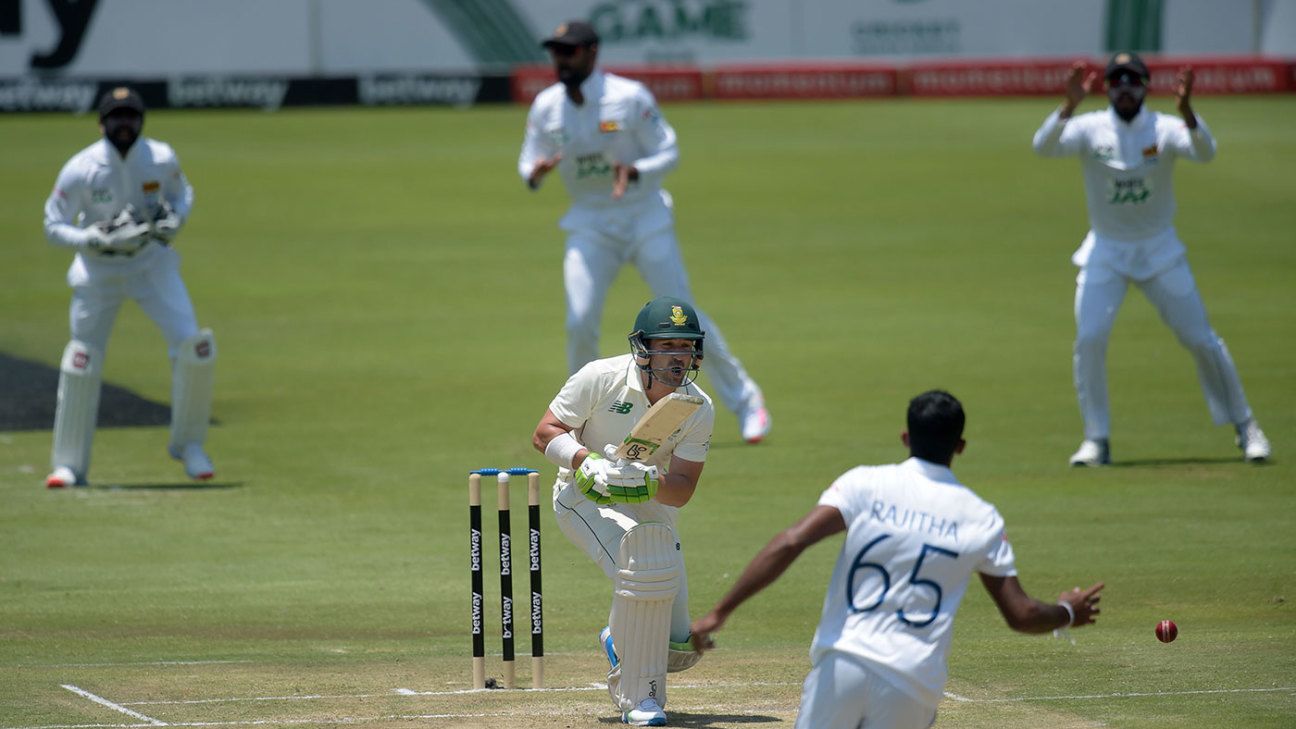 Run rates in excess of four an over, but opener still anticipates tough battle in fourth innings

The SuperSport Park pitch is not as batsmen-friendly as the scores suggest, according to South Africa’s opener and top-scorer so far, Dean Elgar.

Despite the teams piling on 713 runs over two days at a rate of more than four runs an over, Elgar suggested it has been tough going, especially against the quicks.”You’d think it’s actually quite flat but it’s not. There’s been quite a lot of assistance for the bowlers in the last two days,” Elgar said. “I don’t think the scores are a reflection on how the wicket is playing. It’s been a combination of good batting and poor bowling.”

Both teams are fielding inexperienced pace packs. Sri Lanka’s is depleted by the loss of Kasun Rajitha, who bowled 13 balls before leaving the field with injury, and the bowlers on both sides are still working out the best approach on a surface with good carry but occasionally variable bounce.

Sri Lanka’s and South Africa’s bowlers alike have learned that pitching it up is better than dropping it short and, for Elgar, the key is precision.

For that reason, Elgar was particularly pleased with the way both he and Aiden Markram negotiated the new ball to post South Africa’s first opening century stand in three years.

The pair play their domestic cricket at this venue and have had three first-class fixtures here in the last month, with Markram scoring three centuries and a 75 and Elgar chipping in with a 52. Although he hasn’t been as prolific as his partner, Elgar believes his preparation has been put to good use.

“We have been batting quite well domestically in the last couple of months,” he said. “It’s good to know I have put into play internationally what I have done domestically. There has been a lot of hard work building up to this.”

South Africa’s opening stand was helped by several boundary-balls from the Sri Lankan attack and their own refined approach, labelled as “aggressive, but smart,” by coach Mark Boucher.

Elgar explained it as “controlled aggression”, which is determined by the situation as much as it is by the team’s philosophy. “You can’t just go out and smack from the first ball, you have to be calculated. We had a good day with the bat, set up by the openers, as we are supposed to do. Of late, Boucher hasn’t spoken about being overly aggressive. He knows we still need to apply ourselves.”

Especially as the pitch changes. After two sunny days and with more heat expected, this surface usually breaks up towards the latter stage of the match, which may make run-scoring more difficult in the fourth innings.