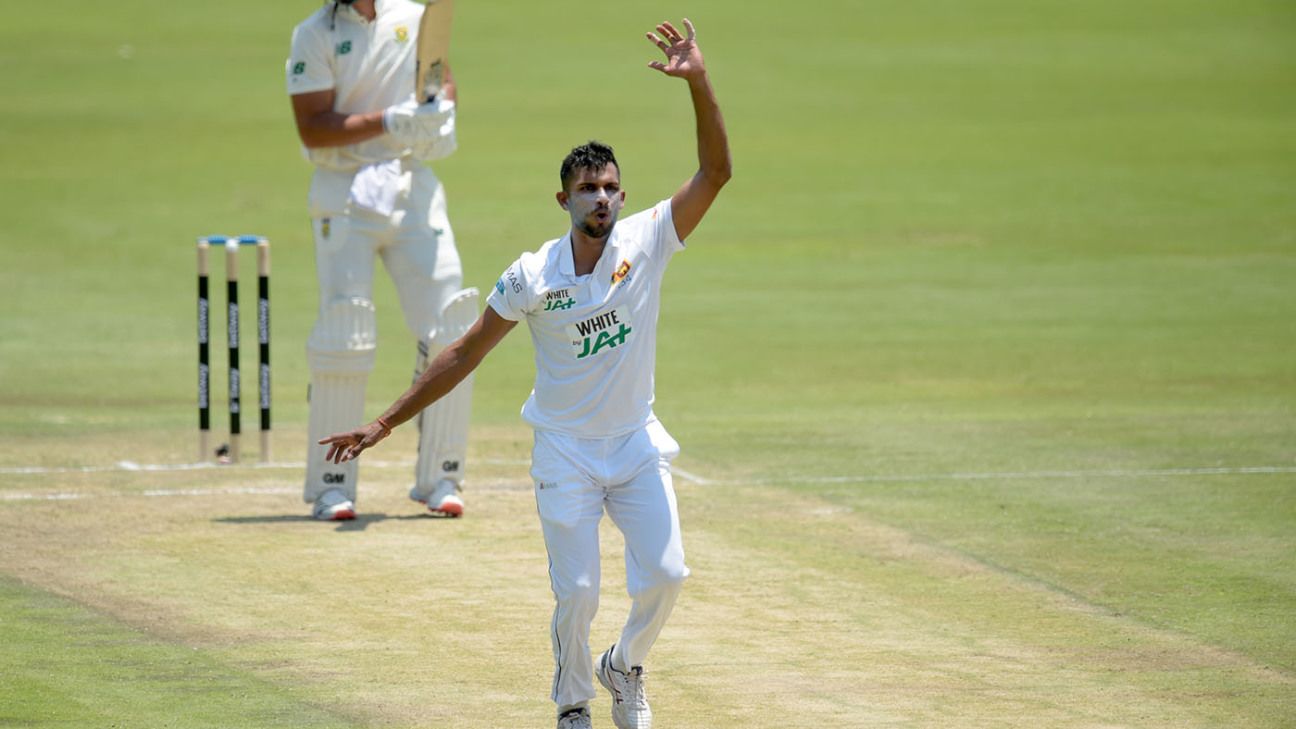 Allrounder gets through 16.5 overs on second day in absence of Kasun Rajitha and Dhananjaya de Silva

Dasun Shanaka batted well with the tail to complete his first Test fifty on the second morning of the Centurion Test, and yet, his more significant contribution so far may have been with the ball. Shanaka is a batting allrounder but was required to deliver almost 17 overs after two Sri Lanka bowlers – a third of their serious bowling resources – were unavailable through injury.

Sri Lanka are unwilling to elaborate on the extent of Kasun Rajitha‘s groin injury, believing that hiding that information confers a competitive advantage – however miniscule. But the early signs are that Rajitha, one of Sri Lanka’s three frontline seamers, will bowl no more than the 13 deliveries he bowled in this Test. With Dhananjaya de Silva‘s offspin also officially unavailable due to a grade two tear in his thigh, Shanaka may have a heavy bowling workload through the course of this game.

“Kasun Rajitha’s injury is really going to affect us – we all know how well he bowled on the last tour here,” Shanaka said at the end of day two at Centurion. Rajitha, it is worth remembering, took nine wickets at 23.22 on Sri Lanka’s last tour in South Africa. “Dhananjaya de Silva also comes in and bowls when they are batting well, and he dries up the runs for us. He does that job. I think we will feel their absence,” Shanaka said.

Both Rajitha and de Silva are understood to have been tasked with performing the holding role in this Test. Without them in the attack, South Africa scored at 4.4 runs an over through day two, getting within 80 runs of Sri Lanka’s 395, after 72 overs of batting. Sri Lanka’s remaining bowlers were somewhat indisciplined through parts of the day, but where captain Dimuth Karunaratne might normally replace a bowler after a bad over, he was forced to persist with them, due to the lack of resources.

“There’s a big effect with the loss of those two,” Shanaka said. “We’ve only got four bowlers, but we’ll have to manage. We have to think of it as an opportunity. More than the number of overs we bowled today, we didn’t bowl in such a a way that we created a lot of chances today. I think that’s why they were able to score quickly.

“It’s a big ask for the other bowlers. But we’ll have to come up with a different plan in the morning and get the job done. Tomorrow morning there will be a bit of freshness in the pitch, so I think the 70-odd run [lead] that we’ve got could be enough to get back in the game.”

On a personal note, however, Shanaka has already impressed in his first Test in three years. He might not have played this match had Angelo Mathews been fit, but he added vital runs with the tail, hitting a six-laden 66 not out off 87. And in a similar circumstance, it is unlikely that Mathews would ever have been able to bowl 16.5 overs in a day, susceptible to injury as he is.

Shanaka may, in fact, have been his team’s most consistent operator on day two. He claimed the wicket of Dean Elgar, and went at 3.32 runs per over – a better economy rate than any other Sri Lanka bowler.

“I was really happy to be able to play a Test after three years,” he said. “I think I’ve got a lot more experience now, and I get a lot of support from the team as well. I was nervous but I was able to turn that around.”