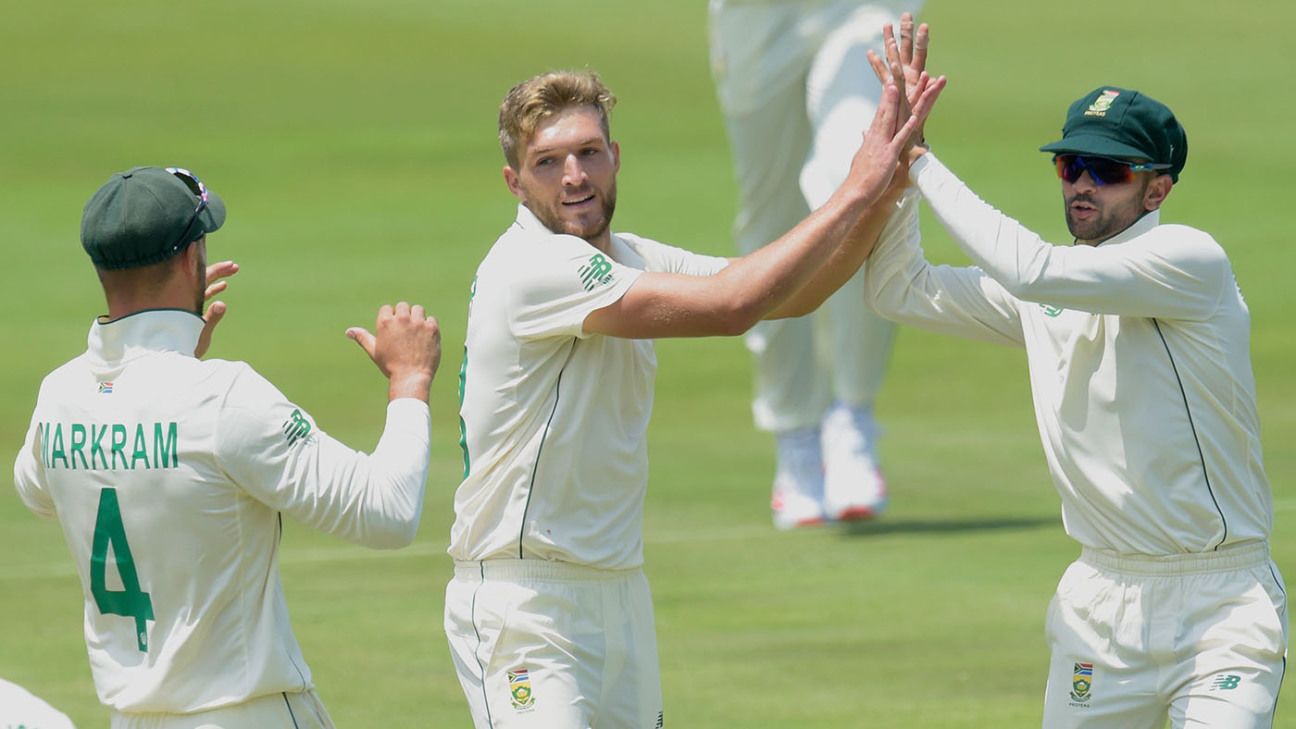 Wiaan Mulder, playing in his second Test 22 months after his debut, has assessed South Africa’s bowling performance as “a little bit shaky” and concluded that he doesn’t “think the guys are happy” with their efforts on day one of the Boxing Day Test.

On a seamer-friendly surface, Sri Lanka scored freely and quickly at SuperSport Park against an attack that lacked control upfront. “We bowled a little bit short. The chat was to hit the top of off stump,” Mulder said. “We didn’t execute and gave them a few freebies and they got away from us.”

Sri Lanka were scoring at more than four runs an over for most of their innings but South Africa pulled things back with three wickets in the final session. Mulder was responsible for two of those but said that he still regards himself as the workhorse of the attack.

“Finding fourth and fifth stump – that’s my role in the team,” Mulder said. “My job is not to be a strike bowler. It’s to keep the run rate down and the economy down.”

Mulder’s clarity over his job in the team contrasts starkly with former international quick, Makhaya Ntini’s, assessment. “It’s very simple for me, we bowled badly. Simple and clear,” Ntini said on pay television network SuperSport “There was no communication between the bowlers, there was no communication from the captain’s point of view, and it looked like it was just anyone who needed to bowl or was asked to bowl, they would be thrown the ball and told: find your own way.”

Ntini’s criticism of the leadership comes in Quinton de Kock’s first match as temporary Test captain, and with the former captain Faf du Plessis in the slips. While de Kock was also occupied with keeping wicket, advice to the bowlers came from the likes of Temba Bavuma, who was seen chatting to debutant Lutho Sipamla, and from each other. Lungi Ngidi also offered Sipamla some assistance during a tough first day for the newcomer.

Mulder, who plays his domestic cricket with Sipamla at the Lions, also had a few words of comfort for his team-mate. “I just said, ‘do what you have been doing for so many years, you’ve been so effective’. And a couple of boundaries going through the slips showed he was bowling in the right areas. It’s a matter of time before we see the best from Lutho.”

Sipamla already showed improvement later in the day when he beat the bat, cranked up the pace and got his first wicket. Ntini is hopeful the progress will continue. “The only thing that you can do as a team is to learn from the mistakes you’ve made so that in the second innings you can do better. They’re capable of bowling a side out cheaply,” Ntini said.

Mulder knows South Africa can’t wait for the second innings and aim to get through the remaining Sri Lankan wickets with the second new ball, which is just five overs old, in order to allow their batsmen some of the best of the batting conditions. “We need to get them out as soon as possible, in the first session for as little runs as possible and lessen the damage,” he said. “The ball is nipping a little bit, especially the new ball.”