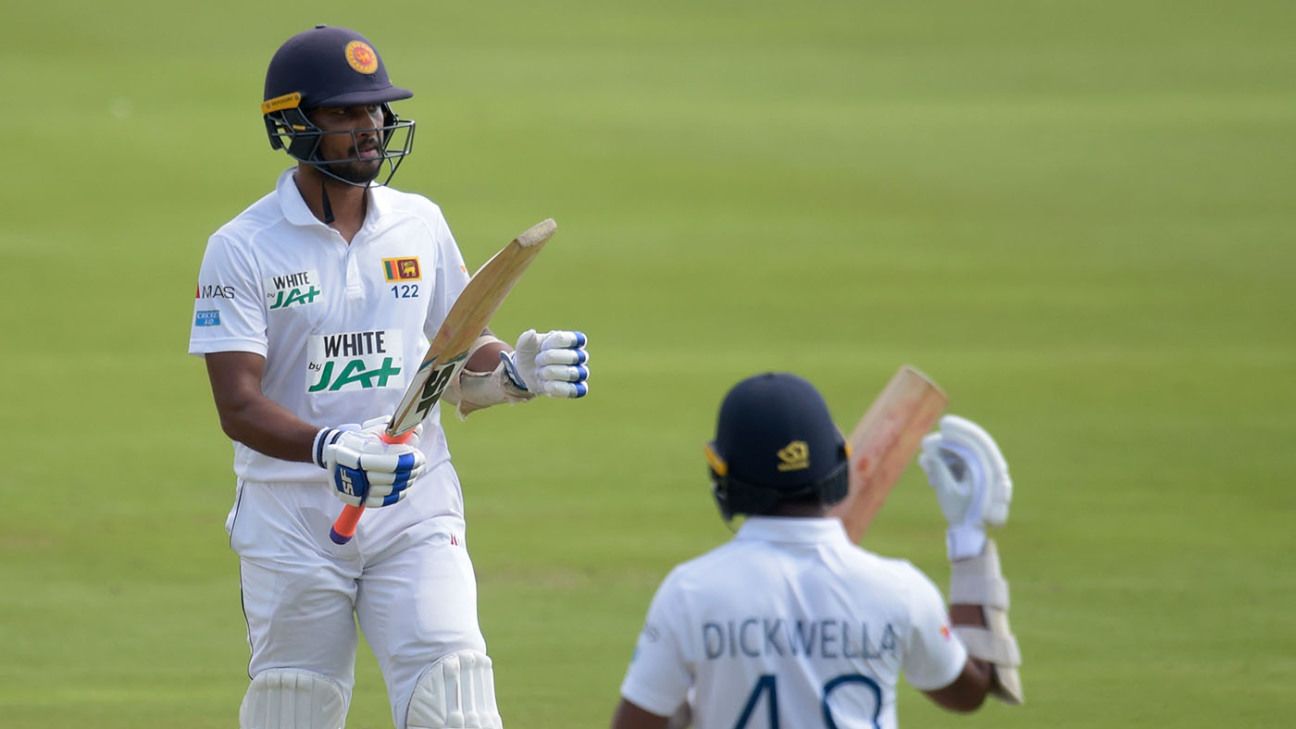 Dinesh Chandimal gave credit to a conversation with Hashim Amla during Sri Lanka’s 2016-17 tour of South Africa after compiling his highest Test score in two-and-a-half years – and his highest in ‘SENA’ countries since May 2016.

Chandimal had struggled for form in South Africa during the 2016-17 series, averaging 14.16 and managing 85 runs across six innings. He missed the 2018-19 series altogether, being dropped after a lean run in New Zealand and Australia, but matched his run aggregate from his previous tour on the first day of the 2020-21 series as Sri Lanka put themselves in the box seat in Centurion.

“It was a tough time to bat, especially at 54 for 3, and the South African fast bowlers bowled outstandingly in that period,” Chandimal said. “So I had a tough time. I especially wanted to get the first 30 balls right, and then I wanted to capitalise after that. I’m really happy with the way I played.”

Chandimal was speaking to host broadcaster SuperSport, for whom Amla was working as a summariser. Told by Pommie Mbangwa that Amla had been praising his innings, Chandimal was quick to bring up the advice that he had been given four years ago.

“I must thank Hashim also,” he said. “I remember in 2016, I had a chat with him [about] how to bat in South Africa – I hope he remembers that. After the LPL in Sri Lanka, we didn’t have that much time to practise before we came to South Africa.

“I used the practices really well, and I got really good information from our head coach, Mickey Arthur, who knows the conditions really well here. So I did lots of hard work before the game started, and it worked really well.”

Amla suggested that his advice to Chandimal had not been “rocket science”, but said that it demonstrated his willingness to improve his game in overseas conditions. Prior to his innings on Boxing Day, Chandimal had managed only one score above 30 in his last 14 attempts in ‘SENA’ countries – South Africa, England, New Zealand and Australia – since his hundred in England in 2016.

“I remember [the conversation] very well,” Amla said. “He came and just asked what advice I could offer on batting in South Africa. You find that [for] many subcontinent players, scoring runs in South Africa, Australia and England is almost like the holy grail for them, because they’re used to scoring in the subcontinent so the more difficult batting conditions [are a challenge].

“Suddenly, they’re really eager to improve. We just talked about the basic stuff – [there was] no rocket science to it. I’m very happy for him. The way he batted today, his technique looked really solid, he left well [and] he put the bad ball away.”

Both men suggested that Sri Lanka had put themselves in the box seat by racking up 340 for 6 on the first day, with Chandimal admitting that the initial target had been a significantly lower total.

“To be honest, we were thinking 280-plus score in the first innings [would be competitive],” he said. “So I mean, 340, this surprised everyone in our team. As a team, we’re really confident after today’s play and are looking forward to putting them under pressure tomorrow.

“If we can get another 30-40 runs, that will be great for us, and at the same time we just want to take early wickets and put them under pressure.”