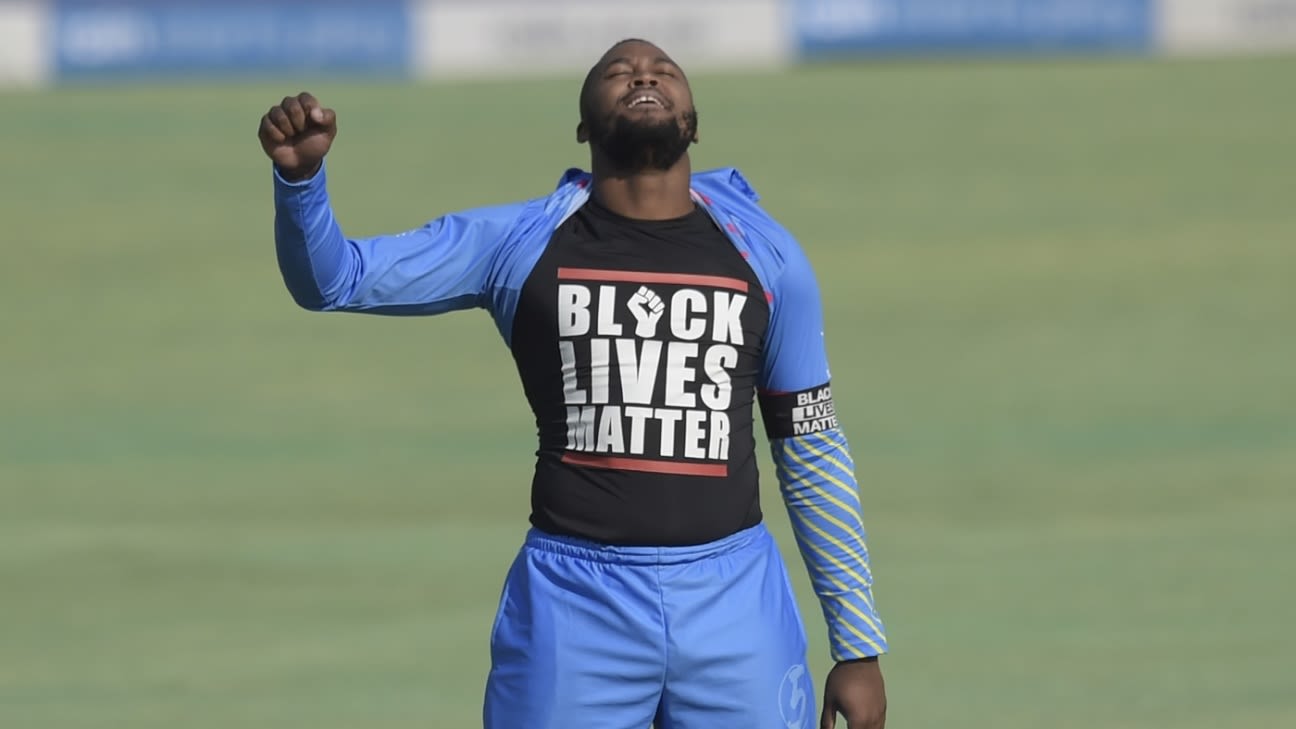 “We’ve had a lot of discussions about this and the guys have come up with a meaningful gesture,” says Boucher

The South African Test team will make an anti-racism gesture when they take the field against Sri Lanka on Boxing Day.

Coach Mark Boucher confirmed that the squad has decided to express their support for inclusion after the interim board issued a statement of concern over the team not taking a knee when they returned to international cricket last month. Whether their action will include taking a knee will only be known on the eve of the match.

“We’ve had a lot of discussions since we’ve come into the bubble about this, especially after what the board statement was and the guys have come up with a meaningful gesture,” Boucher said. “That’s something the players will share with everyone before match day.”

Last Friday, the interim board criticised the team’s response to Black Lives Matter (BLM) but emphasised that they would not force anything on them. However, the board was disappointed that the team did not join other international sides such as England, West Indies and New Zealand in showing “the world that all of us are together in opposing racism at every turn,” and encouraged the team to continue exploring ways to demonstrate anti-racism while reiterating its own support for BLM.

Now, it appears that the team has taken the board’s concerns on board and will go beyond what they did in the England series – a banner on the stands that read: “We stand in solidarity against racism and gender-based violence” – although they were hesitant to say the board’s statement persuaded them to do so.

“We appreciate the board isn’t looking to compel the team into doing anything one way or the other and that they are happy to allow the team to go through their process and come up with something meaningful to them,” Boucher said. “We are happy to engage further with them and what they would like to discuss at a more appropriate time.”

South African cricket’s collision with the BLM movement began when Lungi Ngidi expressed hope that the team would join the rest of the world in “making a stand,” against racism. It then exploded when Ngidi was criticised by four former players, all white.

South African players and support staff took a knee during the exhibition 3TC match in July but decided against doing so when they played as a national side, though they did not explain why. Their decision was met with criticism from within the country, where the legacy of Apartheid remains strong, and most recently by the interim board, proving a divisive and distracting issue for the national team.

And that is not all Boucher has had to think about. After England’s withdrawal from their tour to South Africa because of concerns over breaches of the bio-secure environment, Sri Lanka’s tour was at risk. Sri Lanka Cricket agreed on the team travelling but wanted stricter measures than had been in place for the England series – during which players were allowed to leave the hotel to play golf – and now Cricket Australia will be watching to decide if they will visit South Africa in February-March 2021.

South Africa is also in the midst of a second wave of the Covid-19 pandemic and saw its highest increase in infections on Wednesday, driven by a new and more transmittable strain of the virus, which makes ensuring the Sri Lanka series takes place without incident all the more important. Boucher explained that while he will ensure the players stick to the protocols, he is not overly involved in how the bio-bubble works.

“I don’t like to micromanage. There are certain people who have been put in places to do certain jobs,” he said. “My job is coaching the team so if it’s not my job to control the bio-secure environment and it’s not my job to speak to England to see how they are feeling or speak to Sri Lanka to see how they are feeling. We get given information from our medical staff on what they feel is going to be the best and the safest way for this tour to go ahead.”

On Thursday, South Africa’s squad cleared their fourth – and final – round of testing for Covid-19. For this series, the medical team decided that both teams would be housed at the Irene Country Club, a lifestyle estate near Centurion.

“It is very comfortable. It’s a great place. There’s a nice big dam out here,” Boucher said. “The guys have been doing a little bit of fishing, I always like to fish with a mate next to me but we can’t do that so the guys have got to fish by themselves. We’ve got a golf simulator that’s been set up for us here so that’s nice. The guys really like to play golf. It’s quite irritating that we’ve got Centurion Lakes and Irene right next to us that we can’t go to but these are things we’ve got to do in order to get some cricket.”

Because ultimately, with all that has been going on behind the scenes, cricket is the one thing the South African team has lacked and are desperately in need of.

“Do I want to play cricket? Absolutely. There’s no cricket going in South Africa at the moment, which is disturbing. We want the best for the players and we want to try and get these guys onto the field,” Boucher said. “It’s no use talking about the game of cricket. The best way to better yourself as a player is to get out there and go and play. From my side as a coach, I want the guys to go and play. If we have to go through certain hoops, albeit very strict things, to get us to play a game of cricket then we have to do it. I will drive from that a coaching perspective. With regards to the other stuff, that’s not my job to worry about. I will abide by what I have to do. There’s a lot of other things going on at the moment but these guys are going to play cricket.”