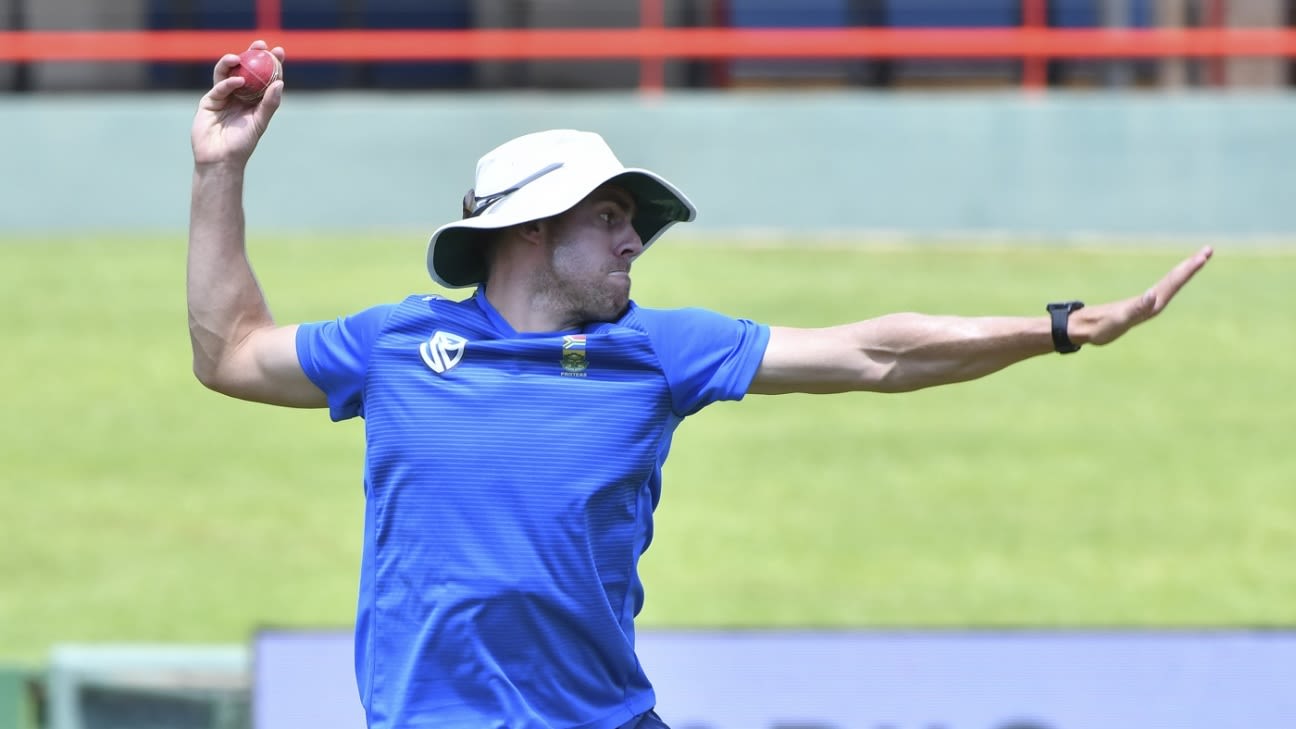 With Ngidi and Stuurman nursing niggles, Nortje could have a big role to play with the new ball

Stereotypical as it may be, the question had to come up.

Is South Africa’s plan against Sri Lanka to attempt to bounce them out based on the (these days outdated) assumption that batsmen from the subcontinent are afraid of the short ball?

Yes, and no, according to Anrich Nortje.

Sounds pretty much like an approach any team would take against other. But it’s a talking point because of the way South Africa have approached series like this before. Meaning series against Asian sides.

It all started after South Africa’s tour to India in 2015 when they were out-spun on pitches that favoured the home side heavily – so much so that the Nagpur surface was rated poor – and decided to exact revenge in future. Sri Lanka’s tour in the 2016-17 summer saw the unleashing of green mambas at venues all around the country, which drew criticism from chief selector Sanath Jayasuriya. South Africa tried something similar, against India in 2017-18, and it backfired at the Wanderers where South Africa lost and the surface was deemed dangerous, against Pakistan in the 2018-19 season, where South Africa won 3-nil, and against Sri Lanka that same summer.

After South Africa lost in Durban, the teams were greeted by a green pitch at St George’s Park but Vishwa Fernando, Kasun Rajitha and Suranga Lakmal outplayed the hosts at their own game and Sri Lanka became the first Asian team to win a series in the country.

Since then, South Africa have not won a series, losing to India away and England at home, and have only won one Test. Crucially, their batsmen have been unable to put decent numbers on the board, both as a result of conditions being difficult and because their confidence has dwindled. That means that although South Africa want to make use of home conditions to turn their results around, conditions can’t be too extreme and the quicks know it.

“There’s going to be a little bit more bounce and a little bit more pace so if we can use it, we’re definitely going to use it to our advantage but we don’t want to get carried away,” Nortje said. “You don’t want to go into a game thinking you are going to bomb guys out and it’s not going to happen. Everyone is playing international cricket for a reason. If we can hit our straps, we are going to ask a lot of questions.”

“It’s the first time in my career I haven’t played a red-ball match in so long. Red-ball has always been the format I have been selected in the most. You get used to things very quickly again,” Nortje said. “It’s not like T20 cricket where you have to think quickly about what the batsman is going to do, it’s about being consistent. It’s a little bit different. It’s more about the rhythm and how the body is feeling and the control you have on the day.”

Nortje is not the only fast bowler who South Africa will look to for discipline. They are likely to hand a debut to Glenton Stuurman – if fit, as he also had a small injury concern on Christmas Eve – who is from the same franchise as Nortje, the Warriors, and who will offer the subtle skill of seam movement.

South Africa know they can’t underestimate Sri Lanka, who have arsenal of their own and bragging rights from their last meeting, especially because South Africa’s own pack is depleted. Kagiso Rabada will not feature in the series after sustaining a groin injury in the T20s against England leaving Lungi Ngidi and Nortje – who have all of 11 Test caps between them – to lead the attack. Ngidi has been nursing a niggle, which could place even more responsibility on Nortje, who is likely to take the new ball. Although he hasn’t played a long-format match since January, Nortje is ready to get going.

“He is a very good bowler. He has got a lot of control and skill. From what I have seen of him in the nets, he has got a lot of talent so he can trouble a lot of guys, especially at Centurion,” Nortje said of Stuurman. “He has got so much control. He’s sort of a Vern (Vernon Philander) but I don’t want to label that on him. That’s the role he can play and we will have to see what the rest is.”

The “rest” could include Migael Pretorius or Lutho Sipamla. They’re both newcomers, which could mean South Africa have three new quicks in the series but Nortje isn’t worried about whether they will be able to pull their weight. “We are inexperienced but we’ve played so much red-ball cricket domestically that we do have a lot of leaders within the group,” he said. “We have sort out tuned our game quite a bit and it’s just about putting in the performances now as a unit.”

Injured Green’s ‘biggest challenge is bowling’, says Australia coach McDonald
M Vijay retires from international cricket
‘This was a shocker of a wicket’ – Hardik Pandya critical of Lucknow pitch
Sri Lanka on the verge of a selection committee shake-up
👀 How Did He Catch That?! | Safe Hands, Chris Jordan.